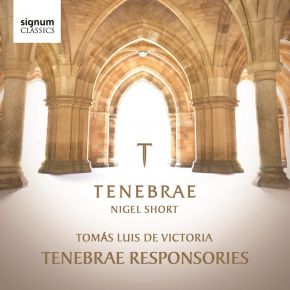 Tenebrae return to the sublime music of Tomás Luis de Victoria with this recording of his timeless Tenebrae Responsories. The works mix the words of the Gospels with other texts commenting on collective suffering written around the 4th century, and would traditionally have been performed as part of a moving service in which candles are slowly extinguished to mark the progress and suffering of Christ that forms the Passion story.

"The award-winnning choir Tenebrae and director Nigel Short blend their passion for singing as if in a large cathedral choir with the precision of a chamber ensemble, creating a glorious sound that combines both power and intimacy. Recommended." - Cross Rhymthas, October 2014