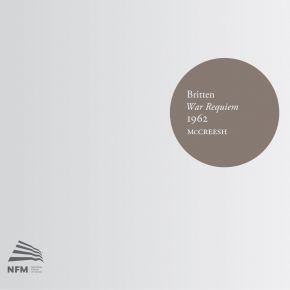 'Following their acclaimed recordings of Berlioz’s Grande Messe des Morts and Mendelssohn’s Elijah, Paul McCreesh has once again assembled the mass forces of Gabrieli Consort & Players and Wrocław Phiharmonic Choir to record one of the iconic masterpieces of the 20th century oratorio repertoire.

The work reflects Britten’s long-held and committed pacifist beliefs. Composed to mark the consecration of a new Cathedral in Coventry, Britten combines the Latin text of the Missa pro Defunctiswith nine poems by the First World War poet Wilfred Owen, which provide a moving (and frequently uncomfortable) commentary on the liturgical text.'