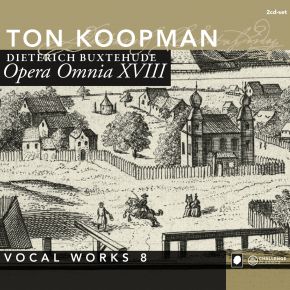 In the succession of Franz Tunder in Lübeck Buxtehude broadened the scope and format of vocal composition by adding sophisticated strophic arias, increasing the role of instrumental ensembles, refining instrumental textures of the vocal scores, and making multi- movement structures are more normative feature in sacred music.

His compositions are based on one side on Latin works, p.e. “O Clemens, o mitis”, the second part of his works are settings of Lutheran hymn texts, p.e.  “Wachet auf, ruft uns die Stimme”. And on the other hand her made settings of pietist poems. The pietist movement became prominent in later 17th-century Lutheran Germany and several lyrical texts set by Buxtehude reflect this leaning toward reflective individual piety. “Meine Seele, willtu ruhn” (BuxWV 74) and “O Gottes Stadt, o güldnes Licht” (BuxWV 87) represent particularly prominent examples of sacred arias.

„ It has been an extraordinary experience to study and record so many works that have rarely if ever been performed. For example: Composed by Buxtehude for his ‘amico’ the Kappelmeister Gustav Düben in Stockholm, Membra Jesu Nostri (BuxWV 75) was little known around 1980. Now the work enjoys wide renown, appearing on many CD recordings. Singers, choirmasters and instrumentalists please take note: there is much more! Listen to this music and study and perform it. Buxtehude deserves it.“ Ton Koopman

Dear mr Manteca, I saw your message at the other product page. You are right, we are definitely not going to left this project incomplete. The next release is planned for this fall!

So this project is to be left incomplete? Why? I think there's still unrecorded material for at least a pair of volumes. I'd like to know an explanation of the reasons to get to this point and then leave us without it, when we were so near the end.

In the list of organ works I cannot find BuxWV 195 "Ich dank dir schon" (choral) Mr Koopman mentioned that two harpsichord pieces (BuxWV A7 and A8) were not recorded; why not? From the list of the cantatas of BuxWV 1-112, about 25 pieces are missing; why? Finally, a few miscellaneous pieces (BuxWV 115, 117, 118 and 133) are not recorded; why not? I think it would have been a a good idea to mention the reasons in the explication of the works. Now one may have the idea that the series is rather to be named "Opera quasi omnia"!

Amsterdam Baroque Orchestra & Choir (orchestra)More information
01-09-2014 BBC Music Magazine
"Whatever follows, the Buxtehude project is arguably Koopman's most important achievement: groundbreaking, ear-opening, comprehensive, scholarly, answering questions, raising others. But above all it sounds like a labour of love.
Bravo Buxtehude - and thank you Ton Koopman!"

01-09-2014 Toccata
"The from Koopman intiated and realised projekt - the recording of the complete works of Dietrich Buxtehude - is one of the most important ones of the last years."
01-08-2014 Choir & Organ
"The excellent instrumentalists are supplemented by good solo singers, whose clarity of diction and expressive phrasing and dynamics are supported by fluent tempi and solid rhythmic direction."
01-05-2014 Gramophone
"Any fears that the concluding volume might be an assortment of odds and ends are unwarranted (the little six-part canon is rather lovely)."
22-03-2014 Written in music
"It's an album that excels in balance and suppleness."
02-02-2014 Opus Klassiek
"An uncompromising approach, as a result Buxtehude's music sounds like a grand monument which is unparalleled in the history of discography in this area. "
BBC Music Magazine
""It's the sheer effortles sparkle and freshness of the playing that continually ambushes the listener as Koopman coaxes sectional gear changes that always exude a suave inevitability.""