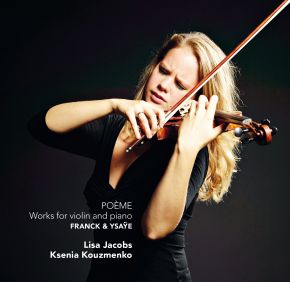 The violin works on this CD have a particularly relation to each other. The CD opens with Ysaÿe’s Poème Elégiaque op. 12: the name is derived from the middle section of the piece, which depicts a passing funeral procession accompanied by tolling bells. It was ultimately also played at Ysaÿe’s own funeral. Extase op. 21 reveals the expressivity and depth of his sound idiom, once again demonstrating his tone-painting ability. The CD concludes with César Franck’s Sonata in A major which was composed as a wedding present for Eugène Ysaye. The young violinist Lisa Jacobs has performed these works in many of her concerts, since she was acquainted to those at the age of sixteen.

Dutch violin virtuoso Lisa Jacobs started playing the violin at the age of 6. She was accepted in the Young Talent class of the Utrecht Conservatory and continued studying with Ilya Grubert at the Conservatory of Amsterdam, At the age of only 17, Lisa made her successful debut with the Royal Concertgebouw Orchestra under the baton of Riccardo Chailly.

Lisa Jacobs has won several first prizes in both national and international competitions, one of them being at the 2nd International Jascha Heifetz Violin Competition in Lithuania 2005, where she received the Audience prize as well. Lisa has followed masterclasses with Thomas Brandis, Julian Rachlin, Philip Graffin and Maxim Vengerov, which was broadcasted on Dutch television.

Eugène Ysaÿe (composer)More information
15-10-2014 The Strad
"Jacob's exultant phrasing and captivaiting sonority reaching new heights"
01-05-2014 BBC music magazine
"Sensual allure...Jacobs' deeply felt beguilingly phrased readings ****"
10-04-2014 Opus Klassiek
"Lisa Jacobs has made ​​a stunning debut album, really a record to be proud of."
07-04-2014 Fanfare Magazine
"Almost all everyone will find that the performances, the recorded sound, and the instrument--as well the program itself--fuse into an irresistible, nearly overwhelming whole. Strongly recommended."
01-03-2014 Luister
"“ If I start writing words like ‘perfect’ and ‘ideal’ you know where I am going. A ‘Luister 10’ for Lisa Jacobs and Ksenia Kourmekno. And for the record team that reaches an equally perfect balance.” "
12-02-2014 PlatoMania
"World class chamber music!"
22-11-2013 Musicalifeiten
""Only for this part the cd is already a great catch""