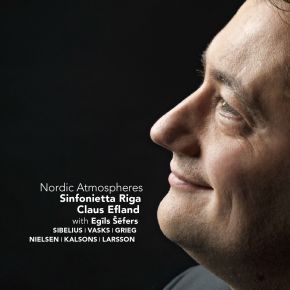 After the first record “Concertante” Sinfonietta Riga wanted to do something completely different, something everyone taking part can relate to personally. The new album shares very close ties between Scandinavia and the Baltic. It’s like a musical seismographic scan, a topography of Scandinavian and Baltic emotional landscapes. Music by composers from Finland, Norway, Denmark, Latvia and Sweden. All of them are based on their close bond with the musical and cultural traditions of their countries, which is reflected in their works like a gene code.

The repertoire on this CD is mainly of music for string instruments, but contains one recording that might call the odd one out: the clarinet concerto by Romualds Kalsons. Claus Efland and Sinfonietta Riga wanted to play two Latvian composers who use a different musical idiom: Kalsons’s clarinet concerto and “Musica dolorosa” by Pēteris Vasks.

The programm is opened with Jean Sibelius’s Romance in C Major and ends with the second movement of the “Pastoral Suite” op. 19, also a Romance, by the Swedish composer Lars-Erik Larsson. A programmatic framework with two very different expressions: one is very dark, the other liberating.

The release of 'Nordic Atmospheres'

The new album “Nordic Atmospheres” of Sinfonietta Riga & Claus Efland is released today and presents an outstanding programm including works by Nielsen, Vasks, Grieg and Sibelius. Claus Efland and Sinfonietta Riga wanted to play two Latvian composers who use a different musical idiom. The repertoire on this CD is mainly music for string instruments, but contains one other recording; The only available recording of Romuald Kalsons Clarinet Concerto. A ...

Sinfonietta Rīga (orchestra)More information
08-04-2015 Luister
""A result to be proud of."

"
01-10-2014 hvt
""A northern adventure worthly of listening to""
26-03-2014 Opus Klassiek
"There is an extra reason to buy this CD, and that's the wonderful recording quality combined with a gorgeous string sound."