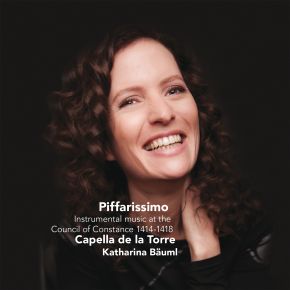 In the years 1414-1418 the largest congress of the Middle Ages took place in Constance: the 16th Council for the election of a pope. It was also the only papal election in Germany. Constance was selected because it was episcopal residence, had sufficient accomodations and suitable buildings and rooms for the meetings. In the city, which numbered 6000 inhabitants, 72 000 guests stayed during the Council. The meetings were framed by church services and various celebrations that were naturally enriched with music. According to contemporary sources at least 365 instrumentalists stayed in the town. With ensembles consisting of shawm, sackbut/slide trumpet  and trombone they emballished all occasions with festive music. Their representative function just took advantage of the more important rulers who brought their own chapels. The wind ensembles were supplemented by percussion or string instruments, as mentioned from a poem by Oswald von Wolkenstein. The South Tyrolean poet, knight and diplomat also stayed in Constance during the council. He is an indispensable witness.

During the Holy Mass the help of the Holy Spirit was implored by the hymn "Veni creator spiritus" or the sequence "Veni sancte spiritus".

The ensemble Capella della Torre has discovered these facts on his search and developed the idea of a musical retrospective of this important historical event. Since the sources never mentioned the names of composers, Capella delle Torre chose for the program the CD first anonymous works. According to the traditional style diversity during the Council also compositions of later masters were involved as well as two songs of Oswald von Wolkenstein. Dances, entertaining songs stand next to solemn or impressive ostentatious pieces. Spiritual melodies were arranged for the instrumental ensemble.

2014-2018, the Council of Constance marks the 600th Time. The city is celebrating this anniversary as an event with Europe-wide broadcasting. Lectures and exhibitions, scientific symposiums and festivals, a wide media presence and an international press work, the involvement of European partner cities and the invitation of high government officials and religious dignitaries move the council anniversary from 2014 for five years in the light of the international public.

Gilles Binchois (composer)More information
John Bedingham (composer)More information
Antonio Cornazano (composer)More information
01-06-2015 EOS Classical Music
""A rich conjuring of pomp and ceremony from a defining time...of the power and potency of medieval music...But if you're already a covert, this one is for you.""
01-09-2014 Toccata
"The music is presented harmonious and sensitive. And eventhough it is a reconstruction - its about music making not about lecturing. This has drive and a special touch."
17-07-2014 Northern Echo
"Brilliant performances that offer a fascinating insight into the music of the time (1414-1418)"
01-06-2014 Early Music Review
"It is very well played with tight ensemble, the shawm sounds characteristic of wide low pressure reeds."
19-05-2014 Opus Klassiek
"A wonderful album!"
17-05-2014 Planet Hugill
"The result is a highly imaginative disc which wears its learning lightly and can be listened simply as a programme of attractive renaissance music, or in the context of the historical background. Highly recommended."
28-04-2014 Pizzicato
"The German Renaissance band Capella de la Torre, playing shawm, slide trumpet, sackbut, cowhorn, lute and percussion, offers a varied program with music performed at the time when the Council gathered in Konstanz in order to elect a Pope. Their performances must be praised for their dazzling clarity as well as a really beautiful and well balanced ensemble playing."