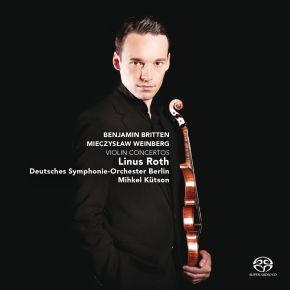 Click here for the promo video of this album!

Benjamin Britten is best known for his operas and vocal music. But amid his output are also eight concertos, only one of them famous. In 1938 he wrote his Piano Concerto. The concerto was his last major work before shipping himself and his partner Peter Pears to
America where his first composition upon arrival was the Violin Concerto op.15. He finished it in September 1939. Of all his attempts at the concerto form, only the Violin Concerto has attained international fame and repertoire-status. Joan Chissell has called the Violin Concerto a work of “searching idiom, solid substance, and serious intent…” although “two of the three movements are completely dispassionate and extrovert in kind” without any “heart-felt appeal to the listener’s emotions [until the final passacaglia].” Britten took a good deal of the inspiration, if not outright quotes or technical means, for his concerto from Alban Berg’s Violin Concerto that Britten had heard in Barcelona in 1936.

Weinberg’s relationship with Shostakovich developed to a point where the closeness might even hurt his reputation when Weinberg is merely seen as a lesser Shostakovich, a darker, grim copy of the famous original. But Weinberg is neither lesser nor did he, though younger, copy Shostakovich any more than Shostakovich allowed himself to be influenced by Weinberg. The more one gets to
know the ‘junior partner’ of this twosome, the richer a picture emerges. Talking about this 1959 concerto, written for and dedicated to Leonid Kogan, Shostakovich remarked that he was “very impressed with [this] magnificent work. And I choose my words advisedly”. As the work will hopefully, surely gain in popularity, posterity will at last be able to confirm that Shostakovich was not exaggerating. Weinberg composed a masterpiece anything—famous or not—the century has to offer in the genre. With its affirmative power and irresistible drive from the first percussion crack of the Allegro molto to the last diminishing violin chord (ushered out by the horns in triple-pianissimo), it has a real chance of breaking into the phalanx of repertoire pieces, while the non-stop virtuosity
demanded of the soloist ought to delight and challenge any curious violinist.

Dear Krzystof, you can buy a hi-res download on https://challengerecords.nativedsd.com/albums/violin-concertos. Enjoy the music.

Sound fantastic, any chance to get it somewhere in high resolution download? 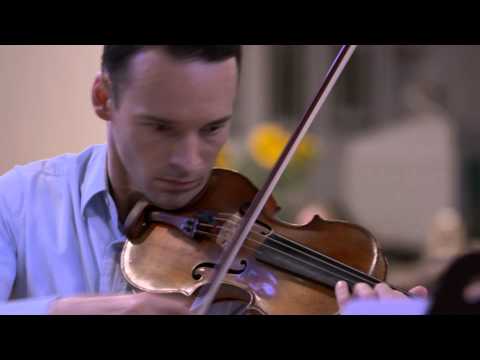 19-09-2015 The Art Desk
"["].. It's a wonderful piece, and this performance boasts stunning orchestral playing from Ruben Gazarian's Würtemberg forces.""
23-08-2015 Financial Times
"3 stars***
["].. To coincide with the 70th anniversary of VJ Day, violinist Linus Roth and the Württemberg Chamber Orchestra Heilbronn put together this imaginitive disc of music composed in the Second World War and its immediate aftermath."
"
25-07-2015 The Independent
"["].. The album opens with "Concerto funebre" by Karl Amadeus Hartmann, a mournful work in which he sought to present "truth that spreads joy and is connected to grief.""
29-12-2014 theartdesk.com
"One from the ten of the year's most scintillating classical releases - This piece is terrific (...) Wonderful, full-blooded backing."
29-12-2014 Voix des Arts
"Best Concerto recording of 2014 - Maestro Kütson and the DSO Berlin musicians retain a significant degree of spontaneity in their realization of the evolving ground bass, and Mr. Roth complements their efforts with playing that combines lightness of touch with robustness of tone."
26-12-2014 The Art Desk
"["].. The ongoing Weinberg revival received another boost in the form of Linus Roth's gripping traversal of the 1959 Violin Concerto, a dramatic, large scale work dripping with personality and good tunes.""
15-12-2014 forbes.com
"No. 9 of the 10 best classical recordings of 2014"
01-12-2014 Gramophone
"One of the recording of the year"
01-08-2014 Fanfaremag.com
"The disc is recommended for the Weinberg––a work urgently worth getting to know––and for an idiosyncratic but effective rendition of the Britten."
01-08-2014 Music Web International
"Linus Roth technical skill is beyond reproach.

15-06-2014 Badische Zeitung
"Linus Roth with clean phrasing and rhythmical precision"
13-06-2014 ft.com
""Britten on Roth's disc has never sounded so soft or soul-baring.""
01-06-2014 Fono Forum
"Master-pieces, 5-star"
01-06-2014 Luister
"The interpertation of both concertos by Linus Roth is without a doubt sublime"
31-05-2014 Tageblatt
"(...) recorded in an exemplary manner. (...) here one can discover beauty and impressive parts."
24-05-2014 theartdesk.com
"If any performer can popularise the piece it has to be the phenomenal Linus Roth, whose unflagging energy makes this CD one of the best concerto discs this year. He is marvellous from the off. Unmissable, and recorded in sensational sound too""
01-05-2014 Music Web International
"This is a highly desirable release played delightfully by violinist Linus Roth.
It's worth getting this recording for the Weinberg concerto alone but with the addition of the Britten it becomes self recommending."

01-05-2014 Musicweb International
"It’s worth getting this recording for the Weinberg concerto alone but with the addition of the Britten it becomes self recommending."
30-04-2014 Pizzicato Online
""Linus Roth is a mervelous performer, technically and musically. The surround sound is gorgeous."
5/5 stars"