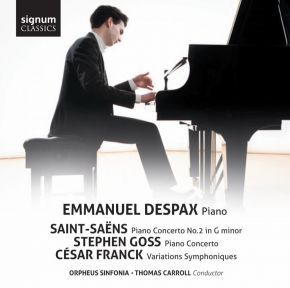 Emmanuel Despax is a rising star on the UK and international piano scene, who has performed at the Wigmore and Cadogan Halls in London and with orchestras including the CBSO. His debut concerto recording, with the Orpheus Sinfonia under Thomas Carroll, features the premiere recording of Stephen Goss’ Piano Concerto, inspired by the designs of Thomas Heatherwick (the work’s premiere performance was the first classical concert in which audiences were invited to bring their iPads and tablets, to watch an interactive display designed to accompany the music). The work is accompanied by two similarly expressive works, Saint-Saëns’ ever-popular Piano Concerto No.2 and Franck’s Variations symphoniques.