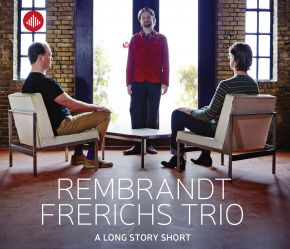 In 2014, the new album of pianist Rembrandt Frerichs is released on Challenge Records.

The title 'A Long Story Short' has always been a phrase that appealed to rembrandt's imagination and is also the title of one of the more cinematic pieces on this album. It is a phrase that, on multiple levels, speaks to the artistic development of this trio.

Rembrandt uses poetry-based rhythms, one of the many reasons why he loves the art music of the Middle East. Frerichs: "l often wondered why an Arabic 23/8 rhythm sometimes touches me more than straight ahead 4/4 time. i think it is because, like a line of poetry, its cadence invites you into a dancing, bouncing universe full of opportunities to change your perspective on your own musical language".
Even if their shared love for Middle Eastern music can hardly be heard literally on this album, it is an important compositional factor. “If I hadn’t spent many hours listening to the music of Kayhan Kalhor, Ahmet Meter, the Al-Kindi ensemble or the Ottoman masters, I would never have come to appreciate the rhythmic aesthetic of their part of the world. The challenge is of course to translate this aesthetic to the musical language of the modern creative piano trio. In this process I always try to keep in mind Mondriaans principal of trying to capture the essence of something by the abstraction of it.”

It is in the recording studio that a long story with many side-tracks needs to be edited down so it can be told in the timespan of an album. In just two days a number years of creative development is condensed into a short and clear message. “I am very happy with the way this worked out, but that doesn’t mean though, that the arrangements of these pieces are now set in stone. In fact, one of the goals of this working band is to continue to refine the performance of the pieces, trying new angles and letting different sides of the compositions reveal themselves.”

Rembrandt Frerichs (featured)More information
Rembrandt Frerichs Trio (orchestra)More information
01-04-2015 Luister
"Interview: "Our project proves that an instrument of ' 200-year-old can be very topical." "
01-08-2014 Pianowereld
""Basically, it's pleasant jazz for at home""
17-07-2014 Draai Om Je Oren
"With the almost mathematical precision written and performed compositions are interspersed with slower, often romantic or dreamy pieces."
16-04-2014 Music Emotion
"The end result is a perfect album."
01-04-2014 Jazzthing
"It's the achievement of the whole ensemble that this album is so appealing."
26-03-2014 Jazzmozaiek
"Respect "
17-03-2014 Jazzenzo
"not a short story short but a long story short. Listen for yourself!"
14-03-2014 birdistheworm
"Just a real lively and exciting album that allows all kinds of lovliness to shine brightly."
24-02-2014 jazzflits
"On a 'Long story short' Rembrandt Frerichs shows again what his ambitions sound like: a brilliant series of short stories that together makes a great panoramic view of shapes.
"

01-01-2014 Lantarenvenster
"A unique album with a lot of own work by Rembrandt, where jazz, eastern and eestern classical music complement each other perfectly. The CD is characterized by other specific artistic decisions, such as the use of Bach corals and the use of both an original mini harmonium (1850) as an Indian harmonium. Guaranteed listening adventure for any music lover."
01-01-2014 Swiss National Radio
""When one says, "To make a long story short," he wants a long story short cut to the essentials. Rembrandt Frerichs' CD "A Long Story Short" however, raises epic feelings. From the first, powerful sounds of the eagerly-Nordic melodies to the oriental-style anthems you can not stop listening with the best intentions. A pianist with a fine-sounding name that you should remember!""
01-01-1970 Pianowereld
""Frerichs is an ingenious composer who expands his jazz borders by drawing from classical music and music from the middle and far east.""
VeraVingerhoeds.nl
"A Long Story Short is the second album by this trio, containing 12 new pieces by Frerichs, in which jazz, Eastern and Western classical music complement each other perfectly."
Bird is the worm
"Just a real lively and exciting album that allows all kinds of lovliness to shine brightly."