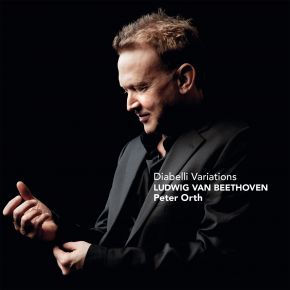 33 Variations on a Waltz by Diabelli, Beethoven’s last great composition for the piano: in 1819, the publisher sent a sheet to fifty personalities on the Vienna music scene, his composition of a German dance (predecessor of the Vienna Waltz), and requested they compose a variation. The theme seemed to fascinate Beethoven, because instead of contributing the desired, small contribution to
the collection of musical curios he immediately got to work, plumbed the depths of all his skills as a composer – and had soon finished 23 variations. Out of Diabelli’s waltz Beethoven created his own musical kaleidoscope, and like the head of Janus it points two ways, both to the past, and to the ways open in the future to the formation of music.

We can hear a fughetta that recalls Beethoven’s own remark: “This shouldn’t be called Bach, but ocean!”; and an Allegro molto alla “Notte e giorno faticar” di Mozart gives us an idea of the wild dance Figaro planned to perform with his lordship the Count. A Notturno offers prospects into Romantic piano music, and we even hear the freely floating harmonies of Claude Debussy resonating as foreshadows of the future.

At the end of his mighty composition, Beethoven includes two acts of homage to the previous century - he himself came from its last third: at first we hear a grandiose fugue, which could have represented the crowning pinnacle of the monument. But the Diabelli Variations actually ends with a minuet, the dance of the Ancien Régime with the tempo mark Tempo di Menuetto moderato and ending in a spaciously composed Coda – like a melancholy reminiscence of past times.

Peter Orth:
The story of how this recording came to be is long and must start with the good fortune I had to become a pupil of Rudolf Serkin in 1978 and gain entrance into his musical atmosphere. Beethoven’s Diabelli variations was a staple of his repertoire. We discussed on several occasions that it might be a piece for me. My confrontation with his playing of the piece planted a seed that took 20 years to take root.

One of the best recordings of the Diabelli Variations ever. Fantastic Pianist!!

Dear mr Maier, The release is planned for April 15, from that date, the CD will be available in our webshop. Click on the button 'Notify Me' If you want to receive a notification when it is available. Kind regards, Challenge Records

I have tried to find Peter Orth's performance on your web store and failed. I would like to purchase.

Ludwig van Beethoven (composer)More information
10-11-2014 Musik und Theater
"In every variation Peter Orth lets us feel the unbelievable menatl powers that drove Beethoven to create this beacon of his own power. He carries out a Sisyphean challenge and creates in us a new respect for the "speed" of the object."
23-04-2014 Klassiek Centraal
"You keep listening and re-listening - always a good sign - and hear almost ragtime in Beethoven ... thanks to daring rubato, surprising speed and a variety of musical "jokes" that Beethoven would have been very happy with in the first place."