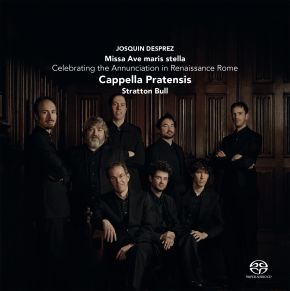 The music of Josquin Desprez is performed, recorded, and studied more than that of any other composer of the Renaissance. Although his numerous Masses and motets are now more than 500 years old, they have entered our modern musical museum of masterpieces, heard in concerts and on recordings as independent works of art. Through superlative craft and sublime beauty, this music transcends its time and place, and its original function as sacred music.

But just as a stunning Renaissance altarpiece becomes even more impressive and meaningful when restored to its original place in the sacred space it was made to adorn, so the sacred polyphony of the period gains in beauty and meaning when heard within the ritual framework it once enhanced. That ritual framework told sacred stories – of Christ, his mother, and the saints – primarily through plainsong and recitation. For special occasions, in institutions able to support highly trained singers, sacred polyphony added special lustre.

This recording aims to recapture a sense of the ceremonial context that would have surrounded Josquin’s sacred polyphony in a place where he sang and composed and where his music continued in use long after he left. That ritual context is the Saturday Mass for the Blessed Virgin during Advent, a liturgy focused on the Annunciation story; that place is the Sistine Chapel in Rome.
The Missa Ave maris stella was copied into a Vatican choirbook for the use of the papal singers no later than 1507.

In order to approach closer to the original performance practices of the papal chapel, Cappella Pratensis here sings whenever possible from scale copies of the very books used by the papal chapel, reading from the square notation of the chant sources and the mensural notation of the polyphonic manuscripts. Like the papal singers, they gather around one large music stand, led not by a conductor standing before the group but rather by the maestro di cappella who sings in their midst. Here, as then, the ensemble is all male, with adult falsettists singing superius and altus lines (there were no boys in the papal chapel), and the number of singers is small, here just two to a part, with duo and trio sections taken by solo voices. In light of the fact that most papal singers in this period were native French-speakers, the Latin of Josquin’s polyphony as well as the Proper plainsongs is sung with a French accent;
the celebrant’s recitations are pronounced with an Italian accent, imagining an Italian cleric presiding. Cappella Pratensis here approaches the chant as the expert papal singers trained in mensural notation likely did, responding to the mensural implications of the square notation.

I look forward to getting this. Cappella Pratensis was in San Diego, CA recently and they are wonderful performers, and Josquin is one of my favorite composers of all times.

Josquin Desprez (composer)More information
Stratton Bull (conductor)More information
10-11-2014 Toccata
"The sound pattern is very clear and the style of singing fluent, with a perfect legato and a brilliant mixture of voices. Since the acoustic is also approriate, this CD be called successfull by any account."
01-08-2014 Gramophone
"(...) the textures are in general exceptionally clear and (...) the lines are beautifully relaxed."
31-07-2014 Choir & Organ
"The liveliness of acoustic and tonal beauty of both recordings and performance from the eight male voices pf Cappella Pratensis, celebrating the Annunciation in renaissance Rome with the Missa Ave maris stella by Josquin in liturgical format with plainsong Propers, is a pukka piece of aural time-travel. Their Franco-Italian pronunciation, evoking the papal choir of Josquin's time, is particularly piquant."
01-06-2014 Fono Forum
"4 1/2 stars"
19-05-2014 Opus Klassiek
"Avocal textured, warm blanket that fully suits the Annunciation. The eight voices are impressive depicted in the church hall."
10-03-2014 De Gelderlander
"The end result is ensemble singing of the highest order."
05-03-2014 Volskrant
""Balanced sonority""
20-02-2014 Brabants dagblad
"On this album Cappella Pratensis is at her best: flawless beauty of sound linked to a faithful interpretation of old scores."