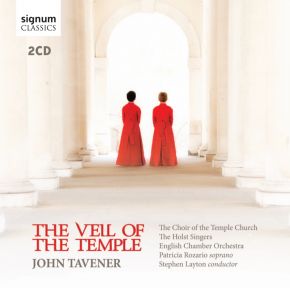 Tavener: The Veil Of The Tempel

• Mr. Tavener considered “The Veil of the Temple” to be his supreme achievement, the greatest work he'd ever composed.
• This set captures the key-moments of this epic 7-hour work, composed to last through the night until dawn in the manner of the grand vigils of the Orthodox Church.
• Re-released to coincide with John Tavener's 75th year in 2014. With the recent passing of composer John Tavener, this release takes on greatly added importance.
• Conductor Stephen Layton directed the proceedings.

John Tavener (composer)More information
Stephen Layton (conductor)More information
30-05-2014 Organ and Choir
"The performance is superb. "
27-05-2014 classicalmodernmusic.blogspot.nl
"It is a stunning achievement that opens up a firmament of sound for us to contemplate."