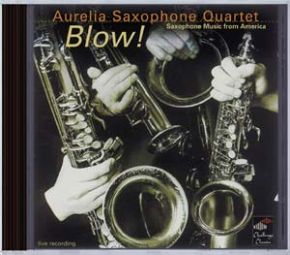 George Gershwin's Rhapsody in Blue, arguably the most popular work for piano and orchestra written by an American, came about almost by accident. Toward the end of 1923, popular bandleader Paul Whiteman asked Gershwin if he'd consider writing a jazz concerto for his orchestra. Gershwin informally agreed to do so and returned to his regular beat of writing songs for Broadway shows. Imagine Gershwin's surprise on January 4, 1924, when his brother Ira brought along that day's edition of the New York Evening Herald, wherein Whiteman announced that George's jazz concerto was to be premiered at a program at New York's Aeolian Hall entitled "An Experiment in Modern Music" on February 12. This was barely more than a month away.
The four-stave manuscript of Rhapsody in Blue, now in the Library of Congress, records that George began work on the piece on January 7, 1924. It was done by February 4, 1924, when arranger Ferde Grofé ordered the orchestral parts be made up in time for rehearsals. Then as now, it was standard procedure for a Broadway composer to use an orchestrator, and Grofé was then producing most of the Whiteman band's original arrangements and leading the rehearsals. George had other help, too: Ira suggested he use the slow second theme based on a melody already composed, and Victor Herbert advised George on some of the transitional material used to hold the movement together. Whiteman clarinetist Ross Gorman improvised the famous clarinet glissando that opens the work as a gag during rehearsals and George asked him to keep playing it that way.
The title, Rhapsody in Blue, is not so much related to the final form of the piece as it was inspired by a painting of James McNeill Whistler entitled Nocturne in Black and Gold. The premiere of Rhapsody in Blue was a huge success and it was clear at the outset that the work had enormous commercial potential. Grofé created three more orchestrations of it -- the first being a 21-part version for theater orchestra that became the standard text of the work for the next two decades. Grofé didn't create a version for full orchestra until 1942, and this is now the version that is most familiar and most frequently recorded. About this time, Grofé created yet another incarnation of Rhapsody in Blue for symphonic band in which the piano part is optional.

On this album you can hear this famaous piece by Barber in an arrangement for saxophone quartet.

The American composer wrote his string Quartet Opus 11, in 1936 – and considered himself happy with the result. But he had one of the twentieth-century’s greatest conductors to thank for what became a new and far more profitable life for this relatively unknown piece. Arturo Toscanini spotted a hit when he heard its second movement, and urged Barber to arrange it for full string orchestra. The composer wisely took the advice on board – and, in 1938, Toscanini premiered the new work with the NBC Symphony Orchestra. Millions of Americans were listening as it was broadcast on the radio, and Adagio for Strings quickly became a huge success.

The solemn, heart-wrenching sadness of the music has lent itself to a range of powerful uses beyond the concert hall. Adagio for Strings was played at the funeral of Albert Einstein, can be heard on all sorts of commercials and movie soundtracks, and has become a modern day hit among trance music pioneers, who have taken the hypnotic harmonies composed by Barber and used them to create very different, high octane sounds. The composer also arranged a choral version of the work, the Agnus Dei, in 1967.

John Cage composed this piece in 1991. As Cage himself instructs, this work is comprised of single tones in flexible time brackets for four saxophones or multiples thereof. The pitches do not sound as written. The intonation should be unique to each player, thus a unison should be “a unison.of differences.” Sounds may be long or short. When they have duration, the loudness should be soft. Very short sounds are free as to loudness, even sfz if wished or ppp.”

As the title suggests, this work by Elliot Carter comprises three movements exploring three different uses of canon. The initial ‘Fanfare’ is an extremely brief unison canon, the second movement a haunting Nocturne and the third a lively and intricate Tarantella. The work was originally scored for clarinet quartet, but was rescored by the composer in 1981 for four alto saxophones. The work represents the earlier, less abrasive period of Carter’s output, but nonetheless a pearl in chamber music repertoire.

When I am drawn to a particular rhythmic groove from an overheard pop song, I scratch my head and think: "I like that, how could I use it?" To me, it's not worth trying to write another of the ten million songs out there. But I've found that if I take a small part of the drum track and assign it to the non-percussion instruments I'm writing for, then interesting things happen. You lose the original context (in this case the baritone sax does not sound like a kick drum), but you gain immediacy and a freshness in the instrumental writing. There will also be a cohesion of compositional intent if you have a strategy for those pitch assignments. When writing this piece, keeping in mind the incredible agility of the saxophone, I wrote a series of rapid notes which form a foundation, of a kind of "directory" from which I pull out pitches to assign to those original rhythms (as the notes fly by in real time). What fascinates me is that this act of translation seems to completely remove the original reference from my music; sometimes I can't even remember what the original song was that inspired me and, if I do, it's hard even to hear the connection. But what remains is the energy.
Like December for string orchestra- the piece that preceded July- I'm trying to incorporate contrasting themes and moods together in a single movement work. To me this evokes a wider range of impressions. Instead of single-mindedly exploring one color, as in earlier pieces of mine, the music now corresponds to an experience of time- the energy and heat we find int he month of July, as well as cooling breezes of repose that come, perhaps, in the evening.

The premiere was played by the Aurelia Saxophone Quartet in the Linenhall Arts Centre, Castlebar, Ireland, September 8, 1994.

The saxophone quartet Blow! was composed by Perry Goldstein in 1993 for the Aurelia Saxophone Quartet. It is an odd tapestry, woven of many seemingly refractory threads, but cohering, or so I hope. There is an aggressive and agitated opening music, not in any key, that returns time and again, almost literally and in various developmental attitudes. Then there is the blues, raw and unexpected, popping out of the texture, squelched, and returning later to have its say. There is a chorale, heard and extended three times over the course of the piece: still, reflecting pools, among the piece’s few moments of rhythmic rest. There is other music as well, not so clearly defined: the language of contemporary music conjoined with the bouncy syncopations of jazz, or classically-oriented, rigorous counterpoint comprised of breezy lines that make jazzy harmonies. At some points, Blow!'s various styles are distinct; at others, the edges between styles begin to blur.  The different musics are sometimes interruptive, but it is a gentle contention, and the disparate styles help define and give color to each other. Finally, the blues are briefly sounded one last time, a gateway onto the uninhibited, exuberantly swinging music that constitutes the long coda. Blow! is a warm place for all these different styles to be together. Loved things are not so inimical; there is room for them all.

Blow! is affectionately dedicated to Andre, Arno, Johan, and Willem, the distinct personalities of that most together of ensembles, the original Aurelia Saxophone Quartet.

In the nineteen-eighties, a sub-genre of heavy metal developed called 'speed metal.' 'Come True' is based on speed metal's use of aggressive repetition and rapidly alternating meters. Let's call it Bartok meets Black Sabbath. On top of this texture, 'Come True' layers a series of slowly ascending multiphonics which, for me, serve as a reminder of speed metal's other main characteristic, a low, growling vocal style. On a good night, the singer sounds like a Japanese B-film monster.

In 1992, when two evenings of my music were presented in De Unie in Rotterdam and Korzo Theater in Den Haag, I wanted to perform something especially written for the occasion with my friends, the Aurelia Saxophone Quartet. Master Bop Blaster is based on a wrong-note variation of Thelonious Monk's 'Straight No Chaser.'