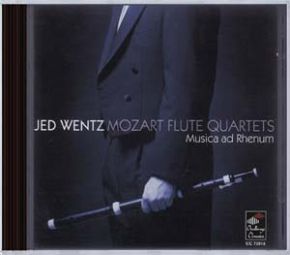 The Noble Art of (Comparative) Simplicity: Mozart's Flute Quartets
"Simplicity is our word of disguise for a shameful unpoetical neglect of expression."
Alexander Pope's assertion, taken from the annotations to his great translation of Homer's Iliad (published in 1715), epitomizes that drive towards grandeur and expression typical of the fine arts of the late 17th and early 18th centuries. Music was no exception: during the Baroque period, musical expression was to a great extent imposed on the notes by means of a highly ornamented and rhetorically constructed performance style. According to the aesthetics of the time, an overly literal performance of music by Handel, Telemann or Corelli would but moderately move the passions of the audience, and any attempt to justify the performer's lack of
2 imagination with a plea of "simplicity" was considered "shameful".

Yet, this aesthetic point of view was to change drastically in the course of the century. Following the lead of composers like Leo, Pergolesi and Hasse, critics and audiences ceased to use the word ‘simplicity’ in a pejorative sense. As the century progressed, noble melodies with straightforward accompaniments became fashionable, while fugues and counterpoint took their last stand in sacred music. By the 1770s, when Mozart was commissioned by a wealthy amateur flautist to write quartets for flute and strings, simplicity had triumphed, and musicians and audiences alike expected composers to supply them with elegant, polished pieces in the latest style, free from Baroque bombast and Rococo bizarreries.