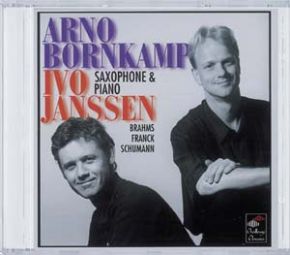 On this album you can listen to romantic pieces by Brahms, Franck and Schumann in arrangements for saxophone and piano by Georges Gourdet, Arno Bornkamp and Martin Uusijärvi.

After finishing the Violin Sonata No. 3 in D minor, Op. 108 in 1888, Johannes Brahms returned to the duo sonata just once more; in 1894, in quick succession, he composed a pair of sonatas for clarinet (or viola) and piano that were published together the following year as Op. 120. The dedicatee of these two works was the clarinettist Richard Mühlfeld, whose playing had been an inspiration to the aging Brahms. The two Op. 120 sonatas, the first of which is in F minor, the second of which is in E flat major, are as like to one another as peas in a pod: rich-textured; songful, indeed, more truly songful than any of the string sonatas, partly by reason of the clarinettist's need to breathe; and not at all filled with the kind of hair-raising drama that has made the D minor Violin Sonata so famous. Because of their opposite modalities, they complement one another as perfectly as do the Tragic Overture and the Academic Festival Overture of 15 years earlier.
The No. 2 in E flat major, Op. 120 has three movements: Allegro amabile, Allegro appassionato-sosteneto, and Andante con moto-Allegro-Più tranquillo. The wealth of long-limbed, lyrical melody in the opening and closing movements led Brahms to abandon the idea of a slow movement in favor of a scherzo-type middle movement in E flat minor; the central trio section, a B major Sostenuto ("ma dolce e ben cantando"), serves nicely to fill the gap left by that missing slow movement. The finale is a theme and variations in which the clarinet and piano join together to spin yard after yard of silken, overlapping, arpeggiated spiderwebs.

1849 was Schumann's most productive year in terms of number of compositions, but it was also extremely rich in terms of the variety of works, which included choral pieces, songs, piano pieces, works for soloist(s) and orchestra, and several chamber pieces for solo instrument and piano. In a few of these works he made use of the relatively new valve horn, which had begun to show up in orchestras in the 1830s. One of Schumann's goals at the time was to create significant music that amateurs could use to further their skills on their instruments with what was called Hausmusik: meaningful, artistic music that they could play in private, at home. The Adagio & Allegro for horn and piano, Op. 70, is one of these works, but it actually takes an extremely skilled amateur to meet the technical demands of the piece. The Adagio is based on a melody that takes advantage of the valve horn's ability to play precise half-step notes. It has the demeanor of Schumann's wistful songs, requiring stamina to sustain the lyrical phrases. The rondo-form Allegro consists of a bright, vigorous main section, which utilizes the full range of horn in rapid fire figures, alternating with more poetic episodes that share melodic and rhythmic motives with the Adagio. Schumann also published versions of the piece with the violin or cello taking the solo part. The success of the horn version of Adagio & Allegro was a major factor in Schumann's decision to write the Konzertstück for four horns and orchestra, Op. 86, later that same year.

C. Franck - Sonata in A major

Aside from the Symphony in D minor, which has become a staple of the concert hall, the Violin Sonata (1886) is Franck's best-known work, and rightly so: It is a superb synthesis of Franck's own uniquely rich harmonic language and thematic cyclicism and the Viennese Classical tradition that he came to hold so dear in the later stages of his career.
The Sonata was composed as a wedding present for the famous Belgian violinist Eugene Ysaÿe, who performed it at his matrimonial celebrations on September 26, 1886. The work's popularity is suggested by the number and variety of arrangements that were eventually made, including versions for flute, cello, viola, and even tuba; of these, however, only the arrangement for cello received the composer's stamp of approval.
The Sonata begins not with a fiery quick movement, but rather with a poetic Allegretto moderato in 9/8 time. After a tentative opening gesture, the music builds to a compelling fortissimo climax. As the violin rejoins the discourse, the drama ebbs to a dolcissimo reprise of the opening. Another climax, this time moving toward the tonic A major, follows, and the movement ends with a brief codetta.
The tender relief of the first movement's conclusion is extremely short-lived, however, as a low sixteenth note rumbling in the piano soon overflows into a full-blooded Allegro. The syncopated main tune is taken over by the violin, and things settle down just long enough for a quasi lento interlude and some fragmented episodic reconstructions of the movement's three main motivic strands. A recapitulation, with suitable harmonic reorganization of the material, follows, and the coda, initially misterioso but increasingly tumultuous, provides an electrifying finish.
The third movement, Recitativo-Fantasia, is in many ways the most immediately striking in the Sonata. The piano makes an introductory gesture that draws on the same rising-third gesture that provided the first movement's main theme, to which the violin responds unaccompanied. The tranquil, almost other-worldly middle section introduces the two striving themes, with characteristic triplet-rhythm accompaniment, that will return in glorious attire in the Finale.
The total defeat that seems to mark the conclusion of the third movement is immediately dispelled by the happy opening of the Finale. Although the initial melody, treated in exact canonic imitation between the instruments, is original to the last movement, the first of the two melodies from the central section of the third movement also makes a return. After an appropriate mingling of these ideas -- and a colorful interlude built on a subsidiary motive from the opening movement -- a tremendous buildup climaxes in the passionate fortissimo return of the second of the two third-movement themes and is immediately repeated a whole step higher. As the dam bursts the opening canonic theme returns once more to bring the work to a cheerful close.

Schumann wrote these three pieces in December 1849. His efforts were not tied to a commission or request by a prominent soloist of the day, unlike other examples in the genre from Weber, Spohr, and others of that era. Thus, they are not particularly challenging pieces, and may in fact be convincingly performed by good amateur oboists. Some listeners coming to this music for the first time might be surprised that compositions so clearly out of the realm of virtuosity, as this trio surely is, could achieve such a high level of art. The fact is, they are more often cited as being the greatest works for oboe from the Romantic period than any others. Of course, a violin, clarinet, or cello can replace the oboe in the score -- and can deliver nearly as satisfying a result.
The first piece, marked Nicht schnell (Not quickly), presents a lovely theme on oboe, supported by imaginative accompaniment on piano. The mood is tranquil throughout. That description might also apply to the second piece, marked Einfach, innig (Simply, ardently), but for a somewhat tense middle section. All three pieces are very similar in the character of their main themes: each, in fact, is songful and might have served the voice just as well as the oboe. The third piece is the liveliest of the trio. Marked Nicht schnell, it is also the most rugged and colorful-sounding one in its main theme. There is more than a hint of Brahms here, a composer who was just beginning to make his mark. The middle section is lovely, similar in character to the opening melodies of the first two pieces. The piano accompaniment is deftly wrought throughout, never overwhelming the oboe, yet always making its supportive presence felt. These Three Romances were first published in 1851 and soon entered the repertory of concert oboists throughout the world.