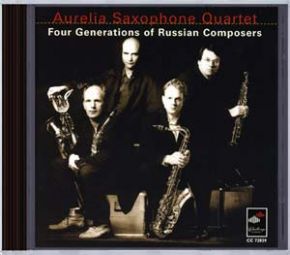 Glazunov decided as one of the first composers of the 20th century, to write a saxophone quartet. It was quite remarkable, that someone who was known as a traditionalist (his nickname was 'The Russian Brahms'),ventured this experiment. In style and form the work is a bridge to the nineteenth century. In general it has a pastoral atmosphere; it is the 'pièce de résistance' of the saxophone quartet repertoire, also by its length. On this recording the piece has an unique rol, as it forms a bridge to later generations of Russian composers, too.