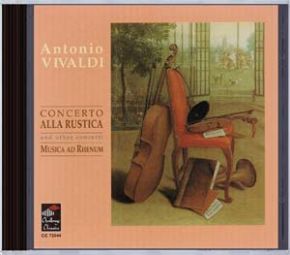 Antonio Vivaldi's concerti without soloists are generally included among the antecedents of the Classical-period symphony. Probably written for highly skilled professional orchestras, these works, mostly written in a contrapuntal style, show what the orchestra can do when it is not in any way subordinated to a soloist. All of these features manifest themselves in the Concerto alla rustica for strings in G major, RV 151. Despite the idea of provincialism implied in the title, this work is a brilliant, sophisticated example of late-Baroque style. The first movement Presto is a virtuoso showpiece for Baroque orchestra, with a bouncy melody that never stops moving. However, the high spirits are quickly and dramatically countered by an unexpected juxtaposition of the same material in a fierce minor, which ends the movement. Ornamental runs from a solo violin decorate the simple melody of the brief Adagio that follows, while the final movement, in dance rhythm, has a busy cello line to support its graceful violin melody. In this exciting work, Vivaldi packs much musical content into a brief time interval.

Published by Michel-Charles Le Cene in 1728, Antonio Vivaldi's set of Concertos (6) for flute was not only the first collection of flute concertos published in Italy, it was nearly the first set of flute concertos ever published. Most are transcriptions of earlier works or new compositions modeled on earlier works, usually chamber concertos from much earlier in Vivaldi's career. The third of the set is an adaptation of the Concerto in D major for violin or flute and violin, or oboe concertino plus strings, and basso continuo ripieno, RV 90, as the Concerto in D major for flute, strings, and basso continuo, RV 428. Called in both cases "Il gardellino," the work, with its gentle themes for the flute soloist and bucolic harmonies for the string ripieno, lives up to its name. The opening Allegro is as light and evanescent as the opening of "Spring" from the Four Seasons. The central Cantabile is as warm and lovely as a soprano aria from a pastorale. The closing Allegro is as vigorous and dance-like as the finale from a divertimento.

Concerto in C Minor for Recorder, Strings and Basso Continuo

Antonio Vivaldi only wrote two concerti specifically for the recorder ("flauto"), one of which is the RV 441 concerto in C minor. By contrast, 13 of Vivaldi's concerti specify the transverse flute ("flauto traverso"), but the fact that two of the flute concerti in his Op. 10 of 1728 were adapted from works originally written for recorder shows that the two can be easily substituted for one another in concert. The recorder certainly had to have been popular when Vivaldi wrote RV 441, for it demands a real recorder virtuoso.
Structurally, each movement follows standard ritornello form, with typically Vivaldian touches like modulation within ritornello sections in the outer movements. The minor mode is almost unrelieved throughout, with only a few momentary major moments. But the first movement is remarkable for the leaping arpeggios it demands of the recorder player, derived from violin playing and much more difficult on the recorder. In the Largo slow movement a simple ritornello provides a frame for the short, sad, generously embellished solo. This seems a momentary respite compared to the Allegro finale; the ritornello music here is dramatically slower than the recorder's solos, which are again rife with treacherous runs and arpeggios that most performers wouldn't want to try on the flute, either.

Of the nearly 50 concertos that Vivaldi wrote for two soloists, strings, and continuo, the Concerto in C major, RV 533, is the only one for two flutes, specifically transverse flutes, not recorders, which are more frequently found in Baroque music. There is the belief that the transverse flute was a more acceptable instrument for use in a religious institution, such as the orphanage where Vivaldi taught, because in the eyes of the Church, the recorder had been associated with lasciviousness in ancient writings. It was most likely that Vivaldi began writing for the flute in the late 1720s, after the talented flutist Johann Joachim Quantz had toured in 1726 and Ignazio Sieber was reappointed as flute master at the orphanage in 1728. In most aspects, this concerto is typical of Vivaldi's non-descriptive concerto style. It is in the fast-slow-fast, three-movement structure; makes use of the ritornello form; and has a generally lighthearted temperament. The opening Allegro molto begins with an extended exposition of the main figures, and as the concerto progresses, each ritornello statement of those figures is briefer than the last. The four episodes between the ritornellos make extensive use of echoing and parallel movement between the two flutes, even at one point using the two flutes together to echo themselves. The gentle Largo contrasts with the fast movements in that it is scored just for the two flutes and continuo, without the string complement. An Allegro completes the concerto, again in the ritornello form. Its main melodic figures are similar to the first movement's in that they are repeated, then used to modulate downward to a second figure, then restated before the first episode for the soloists. Although echoing and parallel motion are again used between the soloists, the episodes in this movement have much more melodic interplay of the two flutes and more ornamentation.