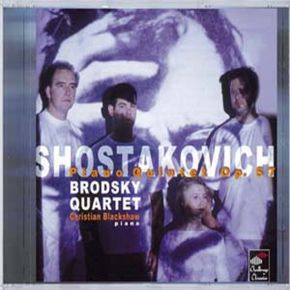 It is undoubtedly true that since Solomon Volkov’s much discussed book Testimony, the name of Dmitri Shostakovich has become synonymous with the repressed, misunderstood composer of genius; viewed in this light, many of his works have been interpreted as concealed political statements. But it has since become clear that this image of the composer as a misunderstood genius needs to be qualified. After all, some of his compositions enjoyed great success with a large public, and a substantial part of his chamber music was intended not as musical confession but as absolute music, which generalises and sublimates the personal experiences on which it is based. In the composer’s own words: “Music acquires its strength through thoughts and ideas, through a process of generalisation [...] In the string quartet, the thought must be profound and the idea pure.”

“Wild Music”
Shostakovich broke into the chamber music field with his Two Pieces for
string octet. As early as 1923 – while still a student at the Petrograd Conservatory – he wrote, among other things, a piano trio; however it was not published until 1983. One thing is already clear from these earliest compositions: Shostakovich was to be no slavish imitator of the prevailing style of Nikolai Rimski-Korsakov, Alexander Glazunov or his own teacher Maximilian Steinberg.
Steinberg was none too enthusiastic about the Scherzo Op. 7 for orchestra that his pupil presented to him. Completely undaunted by this criticism, Shostakovich began in the autumn of 1924 to compose his First Symphony. The work proceeded slowly, primarily because the composer had to work as a cinema pianist in order to keep body and soul together, and his living conditions caused him to become increasingly depressed. In addition his thoughts regularly strayed towards another project: a five-movement suite for string octet, of which he had already committed to paper a prelude and “the beginning of a fugue.”

After Shostakovich had put the finishing touches to the symphony in July 1925, he could devote himself completely to work on the string octet during a stay in Oranienbaum and Slavyansk. The idea of a five-movement suite gave way to that of a diptych, and he discarded the fugue with the words: “It’s not my business to engage in stunts.” In its place Shostakovich composed a scherzo which he described as “the very best I have ever written.” Both pieces were dedicated to his friend Volodya Kurchavov, who had died of typhus shortly before.
Naturally, Shostakovich showed the work to his teacher Steinberg, who “made a sour face and expressed the hope that, when I turn 30, I will no longer write such wild music.” Despite this harsh verdict, the first performance by the Glière and Stradivarius Quartets on 9 January 1927 was a great success and the Two Pieces, like the First Symphony and the Three Fantastic Dances, were accepted for publication by the State Music Publishing House.

Music-making with friends
“I first heard Shostakovich’s music when I was a boy in Moscow during the war years. In the freezing Grand Hall of the Moscow Conservatory he played his Piano Quintet with the Beethoven Quartet.” So writes Fyodor Druzhinin, who in 1964 was to join the Beethoven Quartet as a viola player. He continues: “The audience were wearing fur coats. The hall was fairly empty, and I sat in the balcony with my father, who had just returned from the front after being wounded. Brought up on Mussorgsky, Glinka and Tchaikovsky, I listened to this new music as if under hypnosis, and my only wish was for it to go on for ever.” It was the Beethoven Quartet to whom Shostakovich entrusted the first performances of his string quartets. Only the Quartets Nos 1 and 15 received their premières by other hands: the Glazunov and Taneyev Quartets respectively.
The Piano Quintet too was written at the request of the Beethoven Quartet.
The ensemble had asked for a new string quartet, but Shostakovich decided to add a piano part so that he could perform it together with his friends. “Do you know why I added the piano part to this quartet?” joked the composer to a friend: “So that I could have the chance to perform myself and thereby travel on concert tours. Now the ‘Glazunovs’ and the ‘Beethovens’ won’t be able to do without me – and I’ll get a chance to see the world.”
Shostakovich was in any case an outstanding pianist, who in 1927 took part in the Chopin Competition in Warsaw. His characteristic playing style, dominated not by a flowing legato but by motoric, percussive sounds, has been described by Dmitri Mogilevsky, the cellist of the Glazunov Quartet: “We, the string players, wanted to ‘sing,’ to play with more emotion. Shostakovich accentuated the constructive, motor elements and achieved this effect through clarity and the flow of the music. The emotional restraint of his playing led to a certain contradiction with the nature of strings. He demanded the minimum use of vibrato. The fast tempi excluded in themselves any possibility of emotional exaggeration and an ‘open’ cantilena.” A similar picture is painted by the violinist Yakov Milkis: “He was a wonderful pianist, and when performing he was completely absorbed in his own world. His playing conveyed an ideal sense of form and structure, but more than that it was an expression of his innermost world, one that cost him sweat, blood and tears. He played with a special touch and colour, and often quite intentionally treated the piano as a percussion instrument. It’s rare that a composer uses the upper register of the piano like a xylophone, making a sharp, percussive sound. This is how he played the scherzo from the Piano Quintet for instance. I still have the particular sound of his sarcastic, dry staccato in my ears today. It completely suited the style of the music.”
The première of the Piano Quintet, in Moscow on 23 November 1940, was a great success – Pravda even called it “without doubt the best composition of 1940” – and subsequent performances of the work with the composer at the piano were all acclaimed as high points of the concert season.
In 1947 Shostakovich, contrary to habit, introduced a few changes to the piece during rehearsals with the Dubinsky (later the Borodin) Quartet. The cellist Valentin Berlinsky recalls: “In the Prelude, he asked not to make a ritenuto, despite it being marked in the score. ‘But ritenuto is written here,’ we exclaimed. He came up to us very nervously, took out a pen and crossed out the marking in every part. Rudolf Barshai was the viola player in the quartet at that time. In the finale there is an imitation between the cello and viola. It’s in the score now, but it wasn’t then. The cello and viola were supposed to play together, but Barshai made a mistake and came in after I did. Shostakovich stopped playing and said, ‘Please, mark it the way you played it just now.’ In all the editions published after that date, that is how it is printed.”
By an ironical stroke of fate, in 1941 the Piano Quintet was awarded the Stalin Prize (first class). Nor was the verdict changed when letters arrived from the composer’s opponents, who called the work western and avant-garde and thought that the music did not touch the life of common humanity. Shostakovich did not pocket the money he received with the prize, even though he could sorely have done with it. Instead he donated the entire amount to people in distress, such as the widow of the composer Viktor Kosenko, a victim of state terror.

Film music
Next to music for the concert hall film and ballet played an important role in Shostakovich’s life, in the first instance as a means to earn money. As a student the composer earned a little bit of pocket money by accompanying silent films on the piano. From 1928 he wrote music for as many as 15 films. He also wrote music for seven ballets and theatrical productions. This music is far from being exclusively illustrative. Although it obeys the laws of its medium, whether film or theatre, and thus lacks the formal structures and dimensions of symphonic music, the idiom is unmistakably Shostakovich’s, steeped in Angst, bitterness and sarcasm. It is only recently that this side of Shostakovich has attracted growing interest and suites from the film scores have been performed in the concert hall. Ever the practical musician, Shostakovich himself arranged movements from his film and theatre music and reused these in new compositions. The Two Pieces for string quartet (1931) may serve as an example. The first movement, Elegy (Adagio), is a reworking of Katerina’s aria from Act I of the opera Lady Macbeth of the Mtsensk District. In this sexually charged aria Katerina sings of her loneliness and frustration as she undresses for bed. The Polka (Allegretto) is a string quartet arrangement of a movement from The Golden Age. Shostakovich arranged both pieces in the night of 31 October to 1 November 1931 at the request of the Jean Vuillaume Quartet.
The Five Pieces for two violins and piano are also reworkings of movements from ballet and film music. The prelude comes from the music for the film The Gadfly and the Gavotte from the incidental music for The Human Comedy. Two pieces, Elegy and Polka, come from the ballet The Limpid Stream. Finally, the Waltz is taken from a cartoon for children, The Tale of the Priest and his Servant Blockhead. In this case the arrangements were made not by the composer himself but by Levon Atovmian, who from 1939 to 1948 directed the State Music Publishing House and from 1953 to 1963 was artistic director of the Symphony Orchestra of the State Film Commission. He was thus in a position to revive the performance of Shostakovich’s music, which the authorities had banned from 1936. For example, he compiled four orchestral suites from movements taken from film music and ballet scores, and also this Suite for two violins and piano. In gratitude Shostakovich dedicated the first of his Six Songs Op. 62 (settings of texts by English poets) to Atovmian.