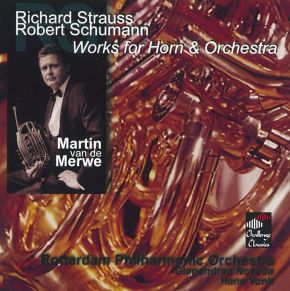 Strauss was only 18 and had yet to develop his own distinctive style when he completed his first horn concerto in 1883. He wrote it for his father, a professional horn player, but the elder Strauss found the work too difficult. Today's soloists, ironically, find it much easier than the horn concerto Strauss wrote at the opposite end of his life. Schumann is the dominant influence here; it's hard not to detect a bit of the earlier composer's Konzertstück for four horns, and other works, in some of Strauss' more declamatory passages, especially the beginning.
After the virile, Schumann-esque opening bars, which provide the soloist a bravura hunting motif, the horn offers a far more lyrical second subject. The soloist takes the lead through the development section, the orchestra merely underlining the solo part and providing a few short bridge passages, including one that gently leads straight into the second movement.
This Andante is a highly lyrical ballad for the horn over a rudimentary orchestral accompaniment built from a simple and extremely repetitive four-note figure. Halfway through, the horn takes up a more extroverted but still long-lined theme over a twittering woodwind figure; the inspiration now seems to be French opera arias.
The finale is a fast rondo featuring a bravura main theme for the horn, which gives way to more expansive but still urgent material. The scherzo-like final bars require fine control and an extremely light touch, as if Strauss were turning to Mendelssohn for a few last words.

Capriccio (1942), the last opera Strauss completed, in some ways represents the culmination of the composer's work in this genre. Capriccio is sometimes described as a "conversation piece," since the plot revolves around a discussion of the nature of opera and the shifting primacy between text and music. Strauss takes up in this work ideas he had already begun to explore in the prologue to the revised version of Ariadne auf Naxos (1916), which opens with the character of the composer worrying about the reception to his art. In Ariadne the issue is not resolved, because the composer's opera is surrealistically commingled with the efforts of a commedia dell'arte group. In Capriccio, however, the matter receives attention as the composer and the poet explore their work and are challenged to compose an opera about that very discussion; in some ways the opera is a metaphor for operatic composition, a topic with obvious resonance and significance for Strauss.
Capriccio was premiered in Munich on October 28, 1942, to an enthusiastic reception and was subsequently performed in several European opera houses during World War II. It is often viewed as a particularly fitting valedictory to Strauss' work in opera and in fact includes both quotations from operas by other composers (including Gluck's Iphigénie en Aulide) and humorous references to Strauss' own Ariadne and Daphne (1936-1937). Such references are not so much self-indulgent as self-critical, and show the composer's lighter side in the twilight of his career; at the same time, the music is more conversational, the motives and ideas more fleeting in their motion. Right from the start, from the string sextet that serves as the overture, Capriccio is more chamber music than grand opera. In exploring the nature of opera in Capriccio, Strauss relied more upon intimate gestures than upon the splashy grandeur of works like Salome (1904-1905) or Elektra (1906-1908); the result bears the stamp of a composer of great facility in full command of his style.

Schumann's Konzertstück in F major for four horns and orchestra, Op. 86, is one of the composer's most neglected works. This is unfortunate because it is an inventive, compelling work that rewards repeated hearings. Unfortunately, the Konzertstück is generally compared to concertos by Beethoven and Brahms, works to which it bears little resemblance. Instead, it should be discussed in terms of its lyric quality and harmonic ingenuity. The Konzertstück was sketched February 18-20, 1849, and orchestrated by March 11. Schumann referred to 1849 as "My most fruitful year," and was truly one of his most productive, second only to 1840, his "year of song." The first performance took place in Leipzig on February 25, 1850, and the piece was published in 1851 by Schuberth.
Schumann could easily have called the Konzertstück a concerto, and it is difficult to understand why he did not. It is in three movements in a fast-slow-fast arrangement and the movements are thematically linked. The four solo parts are for the modern chromatic valve-horn (relatively new at the time), while the two horns in the orchestra are natural horns. Schumann calls for a large orchestra, including piccolo, two trumpets, three trombones, and two tympani. Generally, when the solo horns are playing, the orchestra horns rest.
After two chords in the orchestra, the four solo horns enter fortissimo with the aggressive first subject, and the Lebhaft (Lively) first movement has begun. The lack of an "orchestra exposition" makes it clear that Schumann had no intention of writing a concerto in the Viennese Classical style. Sonata form is still the structural force, however, and the movement boasts a lyric second subject and a developmental central section. Throughout the movement, the tessitura of the solo horns is high, culminating in some extremely high passages for the first horn in the recapitulation. The movement is filled with interweaving phrases in the solo horn parts and, particularly, the woodwinds.
The second movement, entitled "Romanze," begins with the cellos and oboe after a brief pause. The solo horns pick up this same idea and proceed with a lovely, lilting tune with imitative entries. More impressive is the chorale-like subject in the middle section, played first by the high strings and then by the horns, against a background of whirling arpeggios in the cellos. The opening idea returns to close the movement, which moves without pause into the finale.
Marked Lebhaft, the witty, vivacious finale opens with three energized measures in the orchestra before a dramatic, rising arpeggio in the first solo horn. In the ensuing moments, a conversation develops between the orchestra and soloists as virtuoso scales dominate the material. In the central section, a return of the chorale from the middle of the second movement can be heard, now in E major. At times, Schumann doubles parts excessively, but in general the texture is clear and lines are easy to follow.