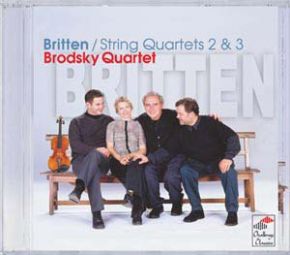 In 1945 the British musical world commemorated the 200th anniversary of the death of English baroque composer Henry Purcell. Although Britten was said to keep always a copy of Haydn string quartets at his beside, he was not a natural sonata-form composer. But the few times he did use this form (which is the natural form of the string quartet) he employed it very originally and very well. The first movement has the expected two contrasting subjects (although one of them spins off yet a third theme). All of them, however, are derived from the same wide leap of a major tenth (the interval spanned in a leap from C to the E an octave higher). This movement, marked "Allegro calmo, " is an economical, consoling piece with muted contrasts. At its end all three themes are played at once. The contrasting middle movement is a sinister night piece. Together they take up only a bit more than ten minutes.
The bulk of the quartet is found in the third movement, lasting 18 minutes. It is here that the obvious tribute to Purcell is found, for it has the name "Chacony, " Purcell's term for "chaconne, " a form that that baroque master had made his own. It is in the form of nine-bar ground bass theme with 21 variations. It is magnificent both structurally and musically, among the finest ground-bass movements ever written for string quartet. Throughout the quartet Britten exhibits his special skill in creating fresh sounds for string ensemble. It is a masterpiece in the already-rich repertoire of the string quartet.

When a composer of note writes a string quartet very near to his death, and we have reason to know that the composer felt the imminence of the end, the listener somehow expects a personal deathbed statement, as it were, from this most intimate of musical media. Britten's final quartet meets this expectation.
It is in a five movement form; like Britten's Second Quartet it contains a Passacaglia final movement and makes notable use of cadenzas. Very rarely for Britten there is a quotation from an earlier work. For there are frequent allusions to Britten's last opera, Death in Venice. Indeed, the final movement of the quartet is named "La Serenissima, " which is an old title for the Venetian Republic. Death in Venice occupied a very special place in Britten's output, for it was only then that he dealt openly with homosexuality as the main subject of a major work.
Britten revisited Venice after his half-successful surgery (he suffered his stroke during the surgery). It was a place he had always loved, as well as being the setting of the opera, and perhaps he realized it was his last visit. During the trip wrote the string quartet in order to be sure of fulfilling a long-standing promise that sometime he would write another quartet; it is also likely that he realized that he must write it now. So his quotations from his Venetian opera are fraught with personal significance. There is an air of serene beauty, of an acceptance of self, that perhaps was achieved through the self-examination that was inevitable in composing Death in Venice, and which Britten may have wanted to link to the city itself in the homage he gave it in this masterpiece of the modern string quartet.

Benjamin Britten (composer)More information
01-07-2015 Gramophone
"["]..'So that a bit of us accompanies you on your adventure. We are all "revelations" as you know. Just go on expanding'.""