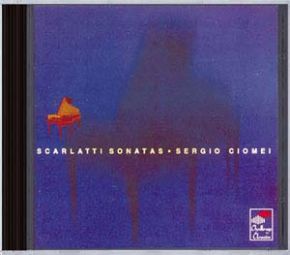 For several reasons, Scarlatti’s harpsichord works represent a phenomenon in the history of European instrumental music. While few composers devoted the most significant part of their output to one single instrument, it is even more unusual to find among them composers who specialised in a single musical form. But this is precisely what Domenico Scarlatti did in his 555 or more harpsichord sonatas, in which the composer expresses all his rich and exuberant inner life within a sole formal pattern.
Scarlatti’s choice is similar to the one made by another Baroque composer, François Couperin, in his harpsichord ordres. In these suites the French composer used several dance forms, giving each piece a title with a descriptive or evocative purpose, or sometimes a dedication whose meaning is partly hidden. In this way Couperin creates a veritable gallery of characters, places and events displaying a vast range of expressive resources. The same variety of affetti and musical situations characterises the sonatas of Domenico Scarlatti. Even on superficial acquaintance, each sonata seems to represent a distinctive world with a strong, personal characterisation.
Unlike Couperin, however, Scarlatti uses only one musical form, the two-part sonata. And only rarely does he provide titles explaining the piece’s contents: apart from some sonatas designated Toccata, Minuetto, Pastorale or Gavotta, only the most laconic tempo indications are given: Allegro, Presto and Andante are the most frequent; Allegretto, Vivo and Vivace are less usual, while other markings are rare. Clearly, then, the musical world of Scarlatti’s sonatas possesses neither structural variety nor literary suggestion: the composer is thus faced with the challenge of breathing new life into the same formal framework. It is also up to performers to identify themselves time and again with the ever- different expressive world of each sonata. So, perhaps, in every sonata a particular colour, title, situation or story can emerge.

Chronology, form and instruments
It is difficult to outline a satisfactory chronology of Domenico Scarlatti’s sonatas. We know that most of them were copied between 1752 and 1757 in a set of 13 volumes for the use of Maria Barbara of Braganza, the Queen of Spain, Scarlatti’s protectress and pupil. If, however, these dates provide reliable information on the date the pieces were copied, they tell us almost nothing about the composition dates. Some scholars contend that the pieces were copied at roughly the time they were composed. If this assumption is correct, then we would have to regard Scarlatti as a composer whose talent bloomed at the late age of 67 and then, in a fit of creative furore, underwent an extraordinary musical evolution in the course of only five years. However, it seems more likely that Scarlatti decided, at the queen’s behest, to rearrange his musical repertory which perhaps, up to that time, had just been improvised on the harpsichord or, at the most, drafted into a sketch-book.
We might posit a rough division of the sonatas into seven periods, by using as a turning point the only group of sonatas intentionally put together in a collection by Scarlatti himself: the 30 Essercizi per gravicembalo published in 1738. The resulting classification would be the following:
1. Sonatas composed during Scarlatti’s first trip to Portugal (1719–c.1724). Some of those pieces belong to a Portuguese manuscript, MS Coimbra 58 from the Coimbra University Library, and do not bear the two-part division.
2. Sonatas that predate the Essercizi, among them three fugues and five sonatas with figured bass.
3. Essercizi per gravicembalo (1738), dedicated to King John V of Portugal, Maria Barbara of Braganza’s father. They represent the early maturity of Scarlatti’s style.
4. Sonatas following the Essercizi; they are very rich in virtuoso contents (Ralph Kirkpatrick describes them as “flamboyant”). They are included in the first two volumes of the queen (1752) and in two other books copied in 1742 and 1749.
5. Sonatas contemporary with the “flamboyant” ones, but technically much simpler, copied in 1752.
6. Middle-period sonatas, copied in 1752–3; they represent an evident evolution of Scarlatti’s style.
7. Sonatas belonging to Scarlatti’s full maturity and late sonatas, copied between 1754 and 1757.

Except for some of Scarlatti’s early works, composed in Portugal, all the other sonatas consist of two repeated sections that contain two themes or thematic groups. This form is usually called “bithematic two-part structure” (or “binary”, according to Ralph Kirkpatrick). In his sonatas Scarlatti tends to use binary form in two different manners. The first manner, which can be called “symmetrical”, is characterised by a first section whose opening theme is in the tonic and whose second theme in the dominant, or parallel major key for the minor-key sonatas; in the second section, conversely, the first theme is in the dominant and the second is in the tonic. This formal scheme would associate Scarlatti’s sonatas with the dance movements of the Baroque suite, except that with Scarlatti the bithematic character is much stronger than with his contemporaries, including Bach.
Scarlatti’s second manner of using the two-part form is much freer and more experimental: after a first part with its two themes respectively in the tonic and the dominant, we find, at the beginning of the second part, a wholly independent section where new thematic material is introduced or, sometimes, an element from the first part is freely worked out. After this section, which we might call “digression” or “development”, we find the recapitulation, where Scarlatti restates the ideas of the first part, almost always omitting the opening theme.
Many scholars have considered this particular form as a forerunner of the classic three-part sonatas (exposition – development – recapitulation). However, we must point out that Scarlatti lacks one of the basic elements of the classical sonata style: the full-scale affirmation of tonality. Starting with Johann Christian Bach and continuing with Mozart and Beethoven, most sonatas from the classical period have a recapitulation section where the two themes, after various vicissitudes, are eventually unified within the same tonality reaffirmed emphatically up to the conclusion. This feature is completely missing in Scarlatti: in the usually very concise recapitulation of his sonatas, only the second theme is restated. Thus, the effect of “returning home” that should occur on regaining the opening tonality is not extended over sufficient time to balance the constant sense of movement due to the modulations of the “development”; at the end, the tonality is achieved again even if it is never stressed.
To conclude this short account of the binary form, we may examine what occurs inside the “development” or “digression” section. Here Scarlatti is almost always able to create a sense of continuous harmonic anxiety by using unexpected modulations, unorthodox chord sequences, outlined but never concluded progressions, and moments of stasis on suspended chord progressions. Often this harmonic exploration starts out from a single melodic or rhythmic pattern, obsessively repeated and usually drawn from the first thematic group of the sonata. After driving a fragment of the first theme to its extreme consequences, in the recapitulation Scarlatti directly re-introduces the second theme, thus creating almost a sense of release that will persist up to the end. If we wish to hazard a loose historical parallel, we may compare Scarlatti’s compositional process to Chopin’s second and the third piano sonatas. Scarlatti’s sonata form, rather than proto-classical, is, in many ways, proto- romantic. Proto-Lisztian virtuosity, proto-romantic form. Can we conclude, then, Scarlatti’s harpsichord is a proto-piano?
In this case the answer is no, because the real piano was being born and was just taking its first steps when Scarlatti was a teenager, and it was already, in those early stages, an instrument absolutely different from the harpsichord. From Queen Maria Barbara’s will we learn that, besides several harpsichords, she owned five fortepianos of Florentine provenance, probably made by Bartolomeo Cristofori and his apprentice Ferrini. Moreover, we know that the fortepiano was Farinelli’s favourite instrument. This great castrato opera singer, like Scarlatti, served at the court of Maria Barbara of Braganza, where his vocal performances were sometimes accompanied by the queen herself: on those occasions the instrument chosen was obviously the fortepiano.
At this early stage, the fortepiano was a weak-sounding instrument whose dark sonority lacked the bright and silvery tones of the harpsichord. Its range was only four octaves, but it already possessed considerable potential for dynamic shading and tonal nuance. Many of Scarlatti’s early sonatas seem to be conceived for this instrument: indeed, their range exactly matches that of Florentine fortepianos, while their instrumental language often does not fit the harpsichord as well, since it lacks the brightness and magnificence typical of Scarlatti’s more idiomatic sonatas. Of course this is only an assumption, as, in his sonatas, Scarlatti never mentions the fortepiano explicitly. On the other hand, the correspondence of some both musical and historical elements – the queen’s will, the presence of Farinelli, the range of many sonatas, the instrumental language – makes this assumption so plausible that I decided to put it into practice by assigning some of the sonatas in this recording to the fortepiano.
The world of Scarlatti’s sonatas might be discussed at even greater length, and more details could be pointed out; however, a wider general introduction could run the risk of getting too abstract, thus losing its links with the heart of the record, i.e. the specific sonatas making up this performance.