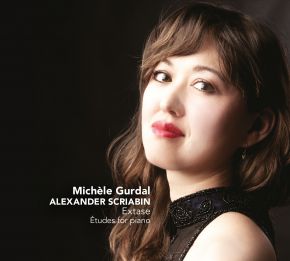 Michéle Gurdal:
The word ecstasy designates something very sensuous and soulful at the same time. It is important to know that with Scriabin ecstasy is firstly of a spiritual nature, but secondly also involves erotic tension.  By taking the title “Extase” I want to draw attention to this aspect in his music, because many etudes of Scriabin’s are permeated with his striving towards a state of ecstasy. From a certain point in time onwards Scriabin’s entire musical oeuvre was actually directed towards reaching a state of absolute ecstasy. His plan was – similar to Wagner – to create a Gesamtkunstwerk, a synaesthetic, total work of art, into which all the senses are drawn.
The etudes are technically very demanding works, and it is particularly the virtuosity needed for these works that enables us to express Scriabin’s passion. His etudes are therefore much more than finger exercises. They are fantastic, multifaceted works, each with its own character and individual, often poetic contents.

In general we distinguish three phases of creativity. The twelve etudes Opus 8 were all composed around 1894/95. His compositions of this period are still very romantic. These works abound in young, rapturous energy but are all completely different in character. Scriabin alternates here between dolorous melancholy and poignant powers of expression. The eight etudes Opus 42 which he wrote around nine years later belong to Scriabin’s middle creative period. These are distinct from the first period because of their augmented harmonic language. He modulates more now and resolves dissonances later. Thus we hear newer, more suspenseful images of sound. The etudes Opus 65 belong to Scriabin’s last creative period. Now his music is reminiscent already of the free-tonal works of the Second Viennese School of Schoenberg, Berg and Webern.

Alexander Scriabin (composer)More information
14-01-2015 Fono Forum
"The belgian-japanese artist has learned her handicraft from the scratch and captivates here with elegant dexterity. (...) Vast sophisticated and colourfull."
01-10-2014 Luister
""The dynamic range is rich, generous, and the rubato and everything is exquisite""
01-09-2014 Gramophone
"Editor's choice
Michèle Gurdal impressively demonstrates the assured technical command and ability to respond to swift contrasts in style required in playing Scriabin`s music"

01-09-2014 Piano News
"...leaves almost nothing to be desired."
08-05-2014 Musicalifeiten
"It is good that a young pianist shows such complete artistic armor."
07-05-2014 Opus Klassiek
"Both the label Challenge Classics and the  pianist deserve a compliment for the chosen repertoire. This is not easy music, neither for the performer nor the audience. But when played on this issue, technical challenges become pure poetry."