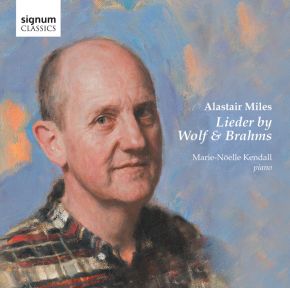 Alastair Miles is internationally recognised as one of the world’s leading basses, appearing regularly with acclaimed opera companies such as WNO, Glyndebourne, ENO and the Royal Opera, as well as with conductors such as Giulini, Harnoncourt, Muti, Rattle, Gergiev, Gardiner, Norrington, Davis and Dohnanyi. On this new recording he explores some gems of the Lieder repertoire from Hugo Wolf and Johannes Brahms, ably accompanied by pianist Marie-Nöelle Kendall.

Personal thought on this recording from Mr. Miles:

"The core of the disc is definitely the Michelangelo Lieder and Brahms Four Serious Songs. I've been wanting to record them for a long time. I first performed the Wolf when I was a student and sang the second Michelangelo song for the Kathleen Ferrier Competition way back in 1986!
In their original key, the Four Serious Songs are just a notch too high for me, but when a few years ago I discovered that the great Hans Hotter had recorded them down a tone, I reasoned I could do the same with some legitimacy!
The similarities between the two sets of songs also fascinated me. As Natasha Loges alludes to in her programme notes the texts of both sets of songs are monumental in their pronouncements on the human condition and strongly agnostic in character, alarmingly so when you consider the Brahms texts are from the Bible! The fact that both song cycles were the very last things each composer wrote - and were written in the same year! - was also too much of a coincidence to ignore: for a time I even toyed with the idea of calling the disc "Famous Last Words....."!
The Wolf Goethe settings are also favourites. Prometheus and Grenzen der Menschheit seem to me different sides of the same coin: of similar extended length the former rails against and insults the gods, whilst the latter takes philosophical comfort from God's power over men's lives. They're also big, dramatic numbers, and benefit from an operatic treatment. The third song, Der Sänger, doesn't get performed much, yet deserves an outing for its gothic, bardic character.
The other Brahms songs are ones which I've known for some time and which show the great variety that Brahms was capable of.
I'm also aware that not many 'true' bass singers do recitals, and even fewer get to record them. In the past this wasn't so much the case: I have recordings of Hotter, Alexander Kipnis and Cesare Siepi, all of whom have influenced my own approach to lieder and repertoire"