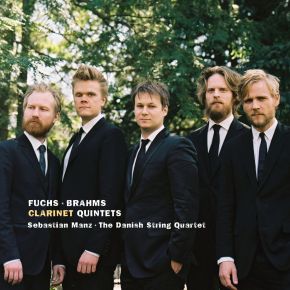 On 15 October 1895, Johann Strauss, Jr. celebrated the 50th anniversary of his performing career. One of the first guests to arrive and pay his respects to the “king of waltzes” was a great admirer, Johannes Brahms. Perhaps not just present to congratulate his fellow-composer, Brahms was certainly also interested in getting to hear a piece written specifically for the occasion: Robert Fuchs’s Serenade No. 5, a witty, cheerful work containing some quotes from Strauss’s operetta Die Fledermaus.
Fuchs attracted Brahms’s notice very early on. Brahms once praised him as “a splendid musician: everything is so fine and so skilful, so charmingly invented!” But Brahms was also aware of his younger colleague’s limitations. As other contemporaries remarked, Fuchs’s music was pleasant but often lacked dramatic effect. Born in 1847 as the youngest of thirteen children of a Styrian village schoolteacher, Fuchs’s lifelong reputation may even have suffered somewhat from the immediate success of his Serenade No. 1 for Orchestra in 1874: from then on, everyone referred to him as the “serenader fox”.
"Fuchs is never really profound”, Brahms remarked. Fuchs was nevertheless one of the rare composers in whom Brahms showed greater interest at all (as their common friend, the surgeon Theodor Billroth, noted). Moreover, Brahms energetically promoted Fuchs’s career. For instance, ”the extremely modest, timid and shy Fuchs had previously felt quite embarrassed” in negotiations with the Kistner publishing house; so Brahms put in a recommendation for him with Friedrich Simrock, his own publisher. Vienna musicologist Adalbert Grote also suspects that Brahms had a hand in Fuchs’s appointment as harmony professor at Vienna Conservatory. And since Fuchs led a rather precarious existence, Brahms helped him out financially as well........
Fuchs, like Brahms, treats the clarinet as first among equals. Connecting two main lyrical themes with a striking transitional motif, the first movement exudes a winning Viennese charm reminiscent of Schubert.... (excerpt from the line notes by Eva Blaskewitz).