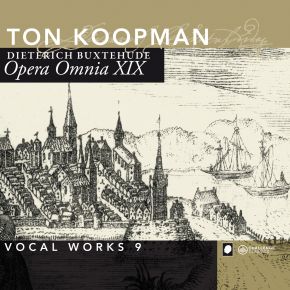 The principal venue for the performance of Dieterich Buxtehude’s vocal music was not the regular Lutheran worship service on the Sundays and feast days of the ecclesiastical year but the series of evening concerts presented at St. Mary’s Church in Lübeck yearly on the five Sundays after St. Martin’s Day (November 11). This annual series of “Abendmusiken” took place from 4 to 5 o’clock immediately following the afternoon vesper’s service. The vocal music performed during the regular services under the direction of the cantor generally followed the structure of the liturgy and the seasons of the ecclesiastical year. In contrast, the programs of the Abendmusiken were in no way restricted to any liturgical requirements and, therefore, could add a new dimension to the spiritual function of sacred music. Buxtehude used to exercise a free hand in this regard and chose for his compositions in the form of arias, concertos, and cantatas texts from a variety of origins including biblical texts, medieval lyrics, church hymns, and modern poetry in both German and Latin languages. As the recorded pieces of the present album indicate, they reflect a wide-ranging repertoire of different types. The majority of texts feature psalm texts, general themes of Christian theology, and even include topics. excluded from the Lutheran canon of texts such as the Corpus Christi hymn by St. Thomas Aquinas, “Pange lingua gloriosi corporis mysterium” (BuxWV 91). Of particular prominence are devotional and mystic poetic texts that relate to the Pietist movement of the later 17th century. Its emphasis on individualism made religion and the love of Jesus more an affair of the heart and of life rather than of the intellect.
In general, the audience of the Abendmusiken was exposed to a broad spectrum of edifying spiritual texts set in great variety of musical forms and styles. The compositions of this CD album are representative of Buxtehude’s interest in responding to the needs and desires of his listeners as well as his true mastership in developing innovative approaches to sacred music and in shaping and consolidating new genres and types of vocal composition.

Oh, OK. I thought and was very concerned the project was to be left unfinished, when I read that line about "reaching the end" in the liner notes of volume XIX. I'm glad it was probably misinterpreted. Pfew! I love this series.

Amsterdam Baroque Orchestra & Choir (orchestra)More information
05-12-2014 ich-habe-gehört.de
"The work of recording the whole Buxtehude works was worth it. The music is really impressive."
15-10-2014 Gramophone
"All these performances benefit from Koopman's lightly tripping organ continuo and the lyrically played rhetorical violin ritornellos"
15-10-2014 Early Music Review
"Ton Koopmann ans his colleagues have captured the essential Buxtehude perfectly (...) thank you Challenge Classic!"
15-10-2014 Hi-Fi
"This is delicate and stately music, somewhat bereft of the groundbreaking harmonic invention and emotional depth of Bach's oeuvre but nonetheless enjoyable and well recorded and performed with presence and precision."
07-09-2014 Sunday Times
"They are performed with flair"
15-08-2014 The Guardian
"Koopman varies them intelligently in this sequence of 10 numbers, and the performances have the unfussy directness that one associates with his music-making"
15-08-2014 The Guardian
""'Sunday afternoons during advent" "
15-08-2014 The Guardian
""It's a pleasantly bracing collection, expertly presented.""