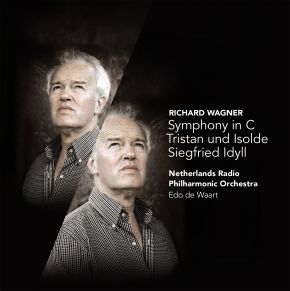 With Edo de Waarts, Henk de Vlieger and Otto Tausk, some of the Netherlands‘ best musicians and conductors have joined one of the country’s oldest and most prestigious orchestra. Together, they invite the listener into Wagner’s world of music theatre: Enjoy his Symphony in C major, revel in the Siegfried Idyll and suffer with the lovers Tristan and Isolde.

He admitted quite frankly that his first compositions showed leanings towards Beethoven; But nowhere is Beethoven as palpably present as in the Symphony in C, which Wagner wrote in the early summer of 1832, according to him in a period of six weeks. Just how thoroughly Wagner had studied the scores of his great predecessor is equally apparent from his mastery of counterpoint and his total grasp of the material. Moreover, the composer himself is already unmistakably present with a theatrical effect that more than once evokes associations with orchestral intermezzos in an opera. But nowhere in Wagner’s works are drama and things theatrical so integrated into the music as in Tristan und Isolde, a work that is at the same time the most symphonic of his operas. A special place in Wagner’s oeuvre is reserved for the Siegfried Idyll, the birthday present with which he surprised his wife Cosima, on 25 December 1870.Although the musical themes were largely borrowed from the opera Siegfried this Siegfried Idyll is the least theatrical and most elegiac work imaginable by the composer It is his ultimate musical declaration of love to the woman who had gladdened him a year and a half before with the birth of their son Siegfried. It is his name, and not that of the opera, that should be linked to the name
that Wagner actually only gave to this musical idyll when it was officially published 1877.

01-02-2015 Luister
"No quote."
01-02-2015 Music Web International
"['']...For major Wagner fans, this is an important release: the symphony's a rarity, and the Nachtgesang arrangement really is wonderful...['']"
19-12-2014 Opus Klassiek
""A valuable addition to the earlier 3-cd-box releases.""
21-10-2014 Sinfini Music
"Edo de Waart and the Netherlands Radio Philharmonic Orchestra admirably take Wagner at his word, playing with verve, beautifully upholstered sound and some giddy climaxes."
15-10-2014 FonoForum
"(...) a really naturally flowing Interpretation that lovingly takes care about the musical details "