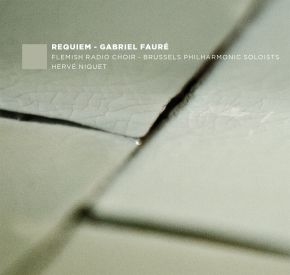 Over the last 500 years, man’s mortality has inspired a genre of unsurpassed profoundness in Western art music: whether conveying fear of death, hope of life after death, or just solace for those who stay behind, the Requiem is at once the rawest and most comforting musical embodiment of the fact that life on earth is finite.

On a series of five albums, acclaimed conductor Hervé Niquet leads the Flemish Radio Choir in new recordings of iconic Requiems (by Brahms or Mozart), but he also delves into unjustly neglected music for the departed, such as the masses by Maurice Duruflé (1947) or Alfred Desenclos (1963).

The most imminent release in the series features the well-known Messe de Requiem by Gabriel Fauré (1888), which – recorded in the original chamber version with soloists of the Brussels Philharmonic – bears heart-warming testimony to Fauré’s desire to write “a lullaby of death, an aspiration towards happiness above, rather than a painful experience”.
Though nothing comes easier than eternal rest after Fauré’s lament, Ein Deutsches Requiem by Brahms – which will be the second instalment in the series – is worth a little longer sojourn on earth…

Hervé Niquet (conductor)More information
Flemish Radio Choir (orchestra)More information
30-01-2015 Musicweb-International
"I can sum up this performance quite easily: it’s a very fine one. Indeed, it’s one of the very best performances of the 1893 version that I can recall hearing on disc. These excellent and thoughtful performances, set down in two different venues and several months apart, are recorded in clean, clear sound. As I said at the start, this is a stylish release."
22-10-2014 Hermann
"Beautiful!"
15-10-2014 FonoForum
"The melody line is always perfect and the sound of an exquisite beauty"