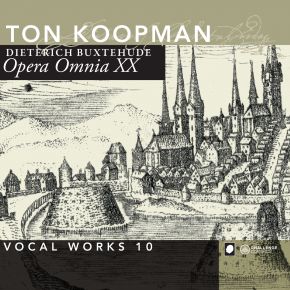 The repertoire of sacred music that originated in Protestant Germany during the second half of the 17th century is of extraordinary variety, full of riches, yet still insufficiently explored and made available. Nevertheless, notably with the Opera Omnia project completed, the large, substantial, and multi-faceted oeuvre of Dieterich Buxtehude represents the period between Heinrich Schütz and Johann Sebastian Bach better than any other contemporaneous composer. The works produced by him during the nearly forty years he held the distinguished position as organist at St. Mary's in Lübeck from 1668 until his death in 1707 also clearly reflect the experimental phase characteristic of sacred music composition at the time. This experimental phase led from the motets, sacred concertos, and chorale settings prevailing before 1650 to the multi-movement cantata, a new genre that with its choruses, recitatives, arias, and chorales, defined Lutheran church music after 1700 for many decades. The present album contains among the many sacred works also three secular compositions, which Buxtehude wrote for weddings commissioned by prominent families in the city of Lübeck.

Amsterdam Baroque Orchestra & Choir (orchestra)More information
09-03-2015 Toccata
"A worthy ending of an impressive monument for a great baroque master. "
06-03-2015 Luister
""Brilliant music, early Baroque, but of great maturity, and sometimes almost visionary.""
17-12-2014 Reformatorisch Dagblad
"["].. Regarding the latter, Buxtehude may  wish of no better interpreter of his oeuvre than Ton Koopman. Hecan,as noother build up the tension in each work again and again. ""
31-10-2014 Trouw
""Koopman has done a monumental act with this project."

"Koopman presents the works with his famous 'schwung' and rhythmical passion.""