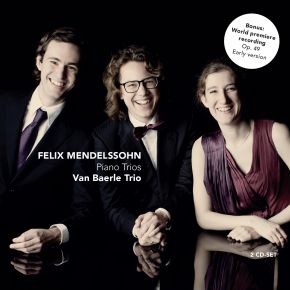 Mendelssohn’s piano trios are among the most popular and frequently played  works within the genre. Both trios are such recognised works and display such perfection of form and content that one might well imagine that they flowed effortlessly from the composer’s pen without a moment’s doubt or hesitation. But was this actually so? In the course of recording the two Mendelssohn trios we had the opportunity to examine a copy of the manuscripts of both works. We were astonished to discover that the manuscript of the first trio displayed considerable differences from the work that we were familiar with as the celebrated Trio in D minor. Further investigation revealed that this was an early version of the same trio, completed in July 1839, nine months before the first edition of the definitive version. To our even greater astonishment it turned out that this version was not just a rough sketch but a complete work, which had undoubtedly stood the test  of time even without Mendelssohn’s later revisions. It was incredible to discover a masterpiece by his hand that was unknown to us. To be sure, it was largely the same as or closely related to the trio that we were familiar with, but there were also wonderful passages that were totally new to us.

Felix Mendelssohn (composer)More information
19-01-2018 Luister
"Maria Milstein wins Dutch music prize."
09-09-2017 Pianist
"You are moving forward as a trio with Beethoven"
17-07-2015 Coburger Tageblatt
""The musicians fascinate with their skills to create very vivid dialogs and to let melodical arcs breathe and flourish in a lively and very strained way.""
13-07-2015 Crescendo Magazine
""Virtuosos, musicians attack the famous scherzi Mendelssohn ties with a sparkling vitality, worthy of the author of Dream of a Summer Night. This not to mention a fine sensitivity, highlighting each dissonance with wonder we forget that these two trios owned for a century and a half, the classics of the repertoire.""
11-03-2015 Volkskrant
""Not a lot of piano threesome's knows such a homogeneous character""
01-02-2015 Luister
"Luister 10 -
"As a trio they operate as a real unity ... This always goes subdued - beautifully soft - or sparklingly exuberant in an always homogeneous beauty of sound."
"

19-01-2015 hr2 - Kultur
"The CD of this three young musicians is a revelation - chamber music at its best"
14-01-2015 Fono Forum
"Tipp - The Van Baerle Trio plays with extraordinary clarity and elagance. Besides the romantic impetus, the elastic lightness and pureness of this music remains obtained.
Music - 5 out of 5 stars
Sound - 4 out of 5 stars"

12-01-2015 Musik & Theater
"One of the very best formations of their guild. Both trios are presented in a smart, intimate and inspiring interpretation so that one can rediscover the often played pieces. A milestone of the Mendelssohn discography."
20-12-2014 De Telegraaf
""This play unfolds itself with an intelligence level we are used to: clear, sensitive and vivavious"  "
19-12-2014 Pizzicato
""Highly energetic performances with a well balanced sound.""
15-12-2014 Applaus
"A refreshingly heartfelt and intimately played recording."
21-11-2014 Klassik-Newsletter.de
"A Must-CD for Mendelssohn fans but also a recommendation for the others: The young van Baerle Trio from the Netherlands suprises with a dedicated recording of the two piano trios full of character."
14-11-2014 Wetzlarer Neue Zeitung
"Outstanding was next to the great interaction of these expressive musicians the substansial, powerfull ductus of the ensemble"
12-11-2014 Gießener Anzeiger
"The three young musicians show impressively what a piano trio can do during playing Debussy, Liszt and Tschaikowsky on an extremly high level - beautiful"
07-11-2014 Mania
""With great enthusiasm and youthful passion, the former classmates play piano trios in an excellent manner""
04-11-2014 WDR3 TonArt
"The ensemble shows a high degree of artistical maturity and its technical sovereignty. The interaction is as if it is made from one piece and the tricky balance of sounds is always perfectly balanced"
22-10-2014 Südwest Presse
"(...) a recording of music-history enormity. But at the end it is the absolutely overmastering play of the ensemble itself that ennobles this recording as a discographic godsense."
23-09-2014 Isar Loisachbote
"This three young musicians, all around 30, know how to touch the hearts of the listener with powerfull dramatic and floating lightness."
22-09-2014 Süddeutsche Zeitung
"What could be better!
There is no way to play Mendelssohn better or in a more chamber music or more musical way."