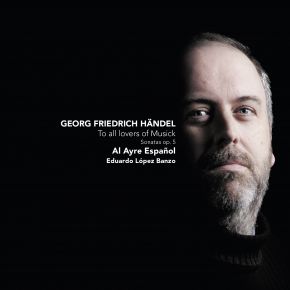 During his stay in Rome, Händel participated in the musical evenings hosted by Cardinal Pietro Ottoboni and Prince Francesco Ruspoli, where he would have met Arcangelo Corelli, who had established the defining features of the sonata da chiesa. It is not surprising, then, that Handel’s six trio sonatas op. 2 (published in 1733, but composed in the early ’20’s) strictly follow the four-movement structure of Corelli’s sonatas (slow-quick-slow-quick). Op. 5 (HWV 396-402), on the other hand, shows a more mature, flexible and personal approach to this formal pattern, adding a fifth movement in all the sonatas and a sixth movement in two of them (Nos. 3 and 5). As a result, these sonatas are, in reality, suites in five or six movements, whose last section is always a dance-piece in the French style (gavotte, minuet or bourrée). The sequence of contrasting movements that characterize op. 5 demonstrates a curious mix of styles and techniques, as well as the juxtaposition of distinctive dramatic characteristics, so that these seven sonatas appear to resemble seven scenes of a wordless opera, combining a variety of feelings. Besides its innovative structure, the most remarkable characteristic of this body of work lies in the fact that it barely contains original music at all: most of it is composed from pre-existing material taken from Handel’s own compositions, which makes it a typical example of a habit so popular among opera composers, the pasticcio. A quotation of previous materials in a “new” piece, as it occurs in op. 5, must not be seen as a sign of creative sterility but as an intelligent way of refreshing his musical thinking with subtle transformations, driven by the process of adaptation to a new context, to a new ensemble and to the conventions of a distinct genre such as the sonata.

Al Ayre Español (orchestra)More information
01-09-2015 Gramophone
"["].. Al Ayre Español never shirk from the chance tot exaggerate - even when it undermines good work they do elsewhere.""
26-08-2015 WDR TonArt
""Who can not enjoy this recording, is no lover of Musick.""
24-07-2015 klassik.com
""Once again Eduardo López Banzo and his Ensemble Al Ayre Español let us hear a headstrong Händel. There are high class artists at work whose view on Händel's complex potentials is very interesting."
Interpretation 4/5
Sound quality 4/5
Repertoire value 3/5
Booklet 3/5"