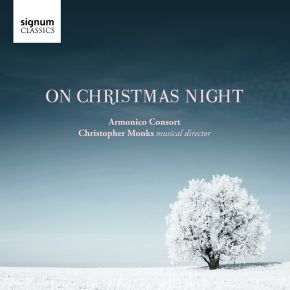 Armonico Consort return to disc on Signum with a festive selection of classic carols and hymns alongside new commissions and arrangements. Rounding off the program is Benjamin Britten’s timeless A Ceremony of Carols. Armonico Consort is the largest arts organization of its type in the UK, and prides itself on working with only the finest talent. Achievement highlights of its first twelve years include: The Magic Flute at The Barbican, Vivaldi's Violin Concertos at the Hampton Court Palace Festival with Nicola Benedetti and Carmina Burana at the RSC new Theatre. A dynamic and innovative conductor and keyboard player, Christopher Monks is founder and Artistic Director of Armonico Consort. Specializing in the performance of music from the Renaissance and Baroque, Christopher’s concerts and recordings have earned him several five star reviews in both The Times and The Independent. “...vocal lines can float, suspensions can melt and the listener can relax and marvel