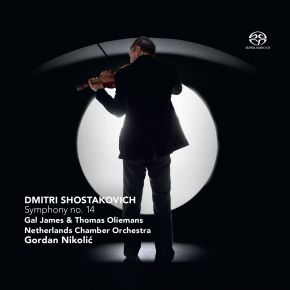 Gordan Nikolić has been the musical director, the concertmaster and the face of the Netherlands Chamber Orchestra since 2004. Nikolić is an energetic master violinist; as the musical director, he puts across what moves him in the music he plays. He studied at the Academy of Music in Basle with the well-known French violinist and conductor Jean-Jacques Kantorow. He has steeped himself in Baroque music, but also works with contemporary composers such as Lutoslawski and Kurtág. He has performed with numerous orchestras in Europe, and the posts he has held include concertmaster of the London Symphony Orchestra, professor at the Royal College of Music and the Guildhall School of Music and lecturer at the Rotterdam Conservatorium.

‘I become more and more convinced that words are more effective than music. When I combine music with words, it is more difficult to misunderstand my intentions.’ A comment by Dmitri Shostakovich in reference to two symphonies he composed that make use of texts. They are Symphony No. 13, composed in 1962 and Symphony No. 14, composed in 1969.

For No. 13, Shostakovich used five poems of the then young avant-garde poet Yevgeny Yevtushenko. The title he gave to his poetic monument for the Russian Jews who had been killed by the German occupying forces at Babi Yar became the name of Symphony No. 13: Babi Yar.

Symphony No. 14 is in fact part of a pair with No. 13, but No. 14 is untitled. In both symphonies, Shostakovich chose the form of a song cycle. Yet they exhibit great differences. No. 13 was written for a large orchestra, a large all-male choir and a bass soloist. In No. 14 he returned to the heart of the symphonic ensemble, the string orchestra. Supplemented with percussion, it accompanies and frames a soprano and a bass. In its expressiveness, this symphony comes close to the poignancy and rarefaction of the fifteen string quartets Shostakovich gave us.

He drew his texts from the world literature. Two poems by the Spaniard Federico Garcia Lorca, six by Frenchman Guillaume Apollinaire, two from the German Rainer Maria Rilke and one poem of Russian origin, by Wilhelm Küchelbecker. On first sight, a black thread of Death runs throughout the entire cycle; in other words, human mortality. The work starts with a ‘De profundis’ (Out of the depths I cry unto thee, O God), as if this symphony comprises a requiem.