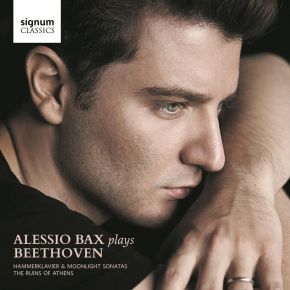 Alessio Bax returns to disc on Signum with two masterworks of the piano repertoire, Beethoven’s “Moonlight” Sonata, op. 27/2 and the grand and imposing “Hammerklavier” Sonata, op. 106, as well as his own transcriptions of pieces from Die Ruinen von Athen (The Ruins of Athens). Pianist Alessio Bax creates “a ravishing listening experience” (Gramophone) with his lyrical playing, insightful interpretations, and dazzling facility. First Prize winner at the Leeds and Hamamatsu international piano competitions – and a 2009 Avery Fisher Career Grant recipient – he has appeared as soloist with over 100 orchestras, including the London Philharmonic, the Royal Philharmonic, The Dallas Symphony and the NHK Symphony in Japan. He is a frequent performer at international festivals, and his extensive concerto repertoire has led to performances with such esteemed conductors as Marin Alsop, Sergiu Commisiona, Vernon Handley and Jonathan Nott.