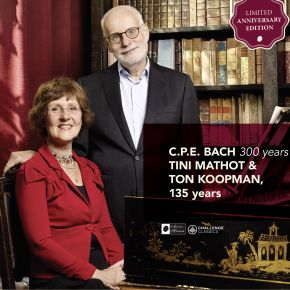 In his day, C.P.E. Bach was often characterised as being an ‘original genius’. His compositions bear striking witness to this fertile originality. For a longtime C.P.E. Bach was viewed as the most renowned Sturm und Drang composer. However the free fantasy, so fabulously represented by C.P.E. Bach, is a phenomenon whose roots date back at least a century earlier. Likewise, the music’s improvisatory character, firmly grounded in a formidable improvisatory ability and C.P.E. Bach’s exceptionally unique harmonic insight, was already a prominent feature in music written long before the Sturm und Drang period, that of Johann Jakob Froberger and the composers who employed the Stylus Phantasticus (Dieterich Buxtehude, Nicolaus Bruhns and the young Johann Sebastian Bach). Rather than attempting to categorise C.P.E. Bach as belonging to a particular stylistic period, it is far better to view him as a highly individual and original composer. His keyboard music forms a unique oeuvre, without any equivalent in his day (incidentally, the word keyboard is used here to refer to clavichord, fortepiano and harpsichord!). Freedom permeates this music, along with unexpected harmonic modulations, rhetoric, virtuosity, special effects, precisely notated articulations, every dynamic gradation, unlimited variety, abrupt stops and tempo changes.

Tini Mathot (soloist)More information
16-02-2015 Fono Forum
"Recommendation of the month
The recording captures the the superb sound of the historical instrument perfectly. A wonderful plea for the works of C. Ph. E. Bach."

01-02-2015 Early Music Review
"["].. Although Tini Mathot has a very relaxed approach to pulse, I felt that this was in keeping with the style of the music - and she does generally respect Bach's ornamentation markings, and  the notes that he wrote.""
12-12-2014 Trouw
""It is truly fantastic to hear these beautiful sonatas played so vividly and balanced by Koopman on this sublime sounding Berlin organ." "
27-10-2014 Rondo
"The variety and beauty of Buxtehude's music is amazing and exhilarating"