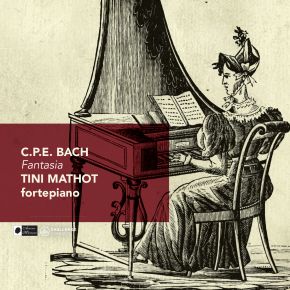 In his day C.P.E. Bach was often characterised as being an ‘original genius’. His compositions bear striking witness to this fertile originality. For a long time C.P.E. Bach was viewed as the most renowned Sturm und Drang composer. Rather than attempting to categorise C.P. E. Bach as belonging to a particular stylistic period, it is far better to view him as a highly individual and original composer. His keyboard music forms a unique oeuvre, without any equivalent in his day (incidentally, the word keyboard is used here to refer to clavichord, fortepiano and harpsichord). Freedom permeates this music, along with unexpected harmonic modulations, rhetoric, virtuosity, special effects, precisely notated articulations, every dynamic gradation, unlimited variety, abrupt stops and tempo changes. This all adds up to an absolutely unique and brilliant style.

This CD features three free fantasies (1784, 1786, 1787), three rondos (1778, 1779, 1780), a set of Folia variations (1778) and one sonata (1763). The majority of these works are from the series of keyboard works ‘for connoisseurs and amateurs’ published by C.P.E. Bach himself. With the exception of the sonata, all the works featured on this CD were composed in Hamburg during the final decade of his life. It is the older C.P.E. Bach speaking in these works, his fiery temperament and rich inventiveness undiminished.

Starting April 26 until the beginning of May Ton Koopman will travel to the USA because he makes his first appearances as Artist-in-Residence conducting The Cleveland Orchestra   On the website of The Cleveland Orchestra we can read:"In his role as a regular guest conductor, Mr. Koopman will lead the Orchestra in multiple programs and concerts through the 2012-13 season. He will also teach public masterclasses annually ...

Carl Philipp Emanuel Bach (composer)More information
01-05-2015 Diapason
"Tini Mathot enters this universe with a subtle awareness of these issues: she masters all ambiguities in the three rondos."
16-02-2015 Fono Forum
"Recommendation of the month
The recording captures the the superb sound of the historical instrument perfectly. A wonderful plea for the works of C. Ph. E. Bach."