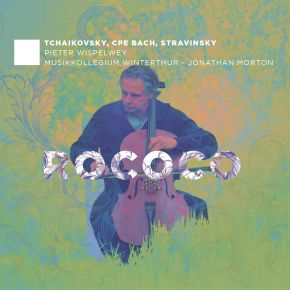 In its narrowest sense, the label “Rococo” pertains to the exaggeration and the mannerisms of the post-baroque era, but on this recording it can refer to any period or style in which old rules no longer apply, and new rules are not ready yet. From the crevices of music history, EPR Classic digs up three masterpieces, which take on fresh relevance in the hands of a virtuoso who delights in the foiling of conventions, and the conducting of formalities with a nod and a wink, while using new masks, colors, registers and gestures.

Nothing is what it seems on this recording. The only piece which is strictly Rococo – CPE Bach’s Cello Concerto in A – sounds romantic on account of its spicy charm and almost improper energy. Tchaikovsky’s Rococo Variations (1877) firmly belong to the Romantic catalogue, but borrow gestures from bygone ages to express how homeless their composer felt in his own times. Strawinsky’s Suite Italienne (1932) – performed here in the version for cello and orchestra – also recycles baroque inspiration, but not for any nostalgic purpose: for Strawinsky, the Suite heralds the new order of neo-classicism which was to determine his work ever after.

Teaming up with the Winterthur Chamber Orchestra, cello icon Pieter Wispelwey tackles these works with fitting playfulness and the unrestrained refinement and sensuality which have become his trademarks.

This will be a welcome addition to the catalogue.

Pyotr Ilyich Tchaikovsky (composer)More information
Jonathan Morton (featured)More information
Musikkollegium Winterthur (orchestra)More information
01-03-2015 Luister
""Wispelwey profiles himself again as a charismatic musician who knows how to transfer the fun of music to the listeners." "
13-02-2015 Crescendo
"The dutch cellist Pieter Wispelwey takes us into a game with style and epochs."
12-01-2015 Plaatpaal Radio 4
"Plaatpaal Radio 4"
07-01-2015 kultur-online.de
"This cellist controles the light-hearted dance as well as the sensitive, sensual expressions. I don't doubt that experts and lover of good classical music will like, even love this recording."
02-01-2015 NDR Kultur
"A CD with unconventional composed repertoire. A CD that awakes pleasure of listening. A CD that is great as a gift in the season after christmas. And a CD that one do not like to slip away."