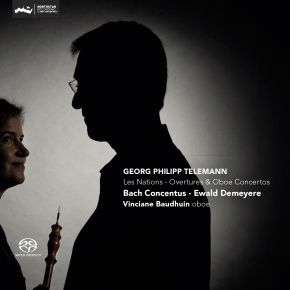 As few other composers, Georg Philipp Telemann (1681-1767) successfully drew on all the national styles and prevailing genres of his time in creating his enormous body of work, for which he received immediate acclaim: in Telemann we encounter one of the most versatile composers of the first half of the 18th century.

In an instalment of his much talked-of periodical ‘Der Critische Musicus’, which was published in 1745, Johann Adolph Scheibe expressed his surprise and admiration about the fact “that Telemann practises almost all musical genres and national styles with the same ease and eloquence, without confusing or corrupting his taste in the least.” In the oboe concertos and orchestral suites Telemann does indeed deploy, to his heart’s content, an entire wardrobe-full of different (dance) costumes for his playful encounters with (other) nations, yet he never stoops to tackiness. It is this gift that sets him apart from his contemporaries and makes him such a fascinating figure among the protagonists who shaped the landscape of our musical history.

Bach Concentus (orchestra)More information
04-01-2016 Luister
"''I could say something about the con brio: at the beginning of the Nations you can't deny that a little bit more colour in the dynamics and finishing the trillers, that would make it more exiting: now it's quite set and straight, and the great hoboplayer could have played in more long notes and let us hear some more vibrato.''"
21-05-2015 Avrotros
"In the newsletter Avrotros Classical: