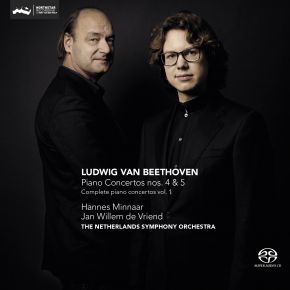 The Netherlands Symphony Orchestra (orchestra)More information
01-04-2016 Klassieke Zaken
"" [...] What a poetic pianist! The technique seems effortless, the phrasing is thought out and at the same time spontaneously (Yes it's possible!) and the result sounds pleasant [...] ""
01-02-2016 Opus Klassiek
"''Total service to the music''"
30-01-2016 HRAudio.net
"''Best is to play Beethoven as it is indicated in the score. That's precisely what Hannes Minnaar is doing. Middle of the road? In my view his' is the road.''"
21-09-2015 NRC Handelsblad
"[''].. Pianist Minnaar shines in an angular Beethoven.""
01-09-2015 Gramophone
""Beginning a Beethoven cycle with the Fourth and Fifth Concertos is a bold move but one that pays off in all sorts of ways.""
01-08-2015 Gramophone
"["].. The piano passagework, too, invariably bubbles with energy and subtlety of detail in Minnaar's hands, not least in the finale of the Fourth, where the timpani and brass add a pungent earthiness to the proceedings."

“The pacing into the finale is well managed, and again there’s a terrific sense of energy and interplay that is very winning.”

"
01-07-2015 Piano News
""Hannes Minnaar exactly knows what is important: the mixture of lyrical moments, that are sensitively tared, and the radical, for Beethoven typical outbursts that need powerfull approach."
Interpretation 4/6
Sound 5/6
Repertoire value 3/6"

01-06-2015 Klassieke Zaken
"In the opening movement of the fifth wants De Vriend every time a little faster than Minnaar, which inhibits him - an amusing detail for the listener. The recording quality of this production is exeptional: a perfect balance of sounds and a nice acousics.
"

01-06-2015 Crescendo
""Rarely these two war horses sound so "freed", so pinpoint accurate, so aerial beautiful and so visinoary modern.""
18-05-2015 Crescendo Magazine
""A recent other recording that these two concerts feedback is that with Till Fellner (ECM) and he has probably has some more depth, but the spontaneity and naturalness of lover-it was a convenience without superficiality that irresistible reminds Arthur Rubinstein-its really enchanting."
[…]
Jan Willem de Vriend conducted his Orchestra with great rigour and intelligence [...] "

"
07-05-2015 De Limburger / Limburgs Dagblad
""Jan Willem de Vriend has developed into a strong brand. With one of enthusiasm vibrating tongue saves the managing violinist itself through life." "
07-05-2015 Het Parool
""Minaar plays beautifully, with a warm, embracing rone, and De Vriend accompanies energetic." "
16-04-2015 De Gelderlander
""The adrenalin level rises to a great height, especially in the cadences." "
01-04-2015 Luister
""Characteristic to this cd-recording is the non-equal temperament, which gives each key its own character."
"
24-03-2015 BR Klassiek
""Extremely vivid mix of sounds""
24-03-2015 BR Klassik
""The pianistic standard concert repertoire by Beethoven rarely approches one in such a energetic and fresh way as it does on this CD of Hannes Minaar, Jan Willem de Vriend and the Netherlands Symphony Orchestra.""
09-03-2015 NRC Handelsblad
""Pointed, dynamic and sometimes almost stumbling of enthusiasm.""
27-02-2015 Trouw
""The level of the young pianist is impeccably high.""
14-02-2015 Trouw
""Things work better if they happen to you. In this way I also want to make music: it's about passing music on instead of imposing my interpretation on the listener. The best moments are the unexpected ones."

"Music is a kind of dream, in the same way immaterial and slippery. I live in my dream - or does this sound cheap?""