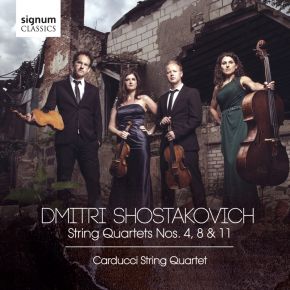 Described by The Strad as presenting “a masterclass in unanimity of musical purpose, in which severity could melt seamlessly into charm, and drama into geniality″, the Carducci Quartet is recognized as one of today’s most successful string quartets. Performing over 90 concerts worldwide each year, the quartet’s upcoming performances of the complete Shostakovich quartets on various concert stages worldwide coincides with this CD, their second Signum release, featuring the composer’s 4th, 8th and 11th quartets.