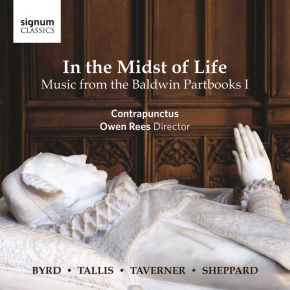 Following its nomination for a Gramophone Early Music Award in 2014, Contrapunctus now releases an album of motets from the Baldwin Tudor partbooks on the theme of mortality. Conducted by Owen Rees, the album includes Sheppard’s epic Media vita and works by Byrd, Parsons, Mundy, Taverner, Gerarde and Tallis, with Contrapunctus’s own reconstructions of the missing tenor parts. Founded in 2010 and directed by Owen Rees, Contrapunctus draws its repertoire from England, the Low Countries, Spain, Portugal and Germany, particularly in the 16th -17th c.

Owen Rees (conductor)More information
19-07-2017 Stretto
"However this music originally was only performed by the ''choirboys'' and men, this edition is also sublime! A true musthave!"