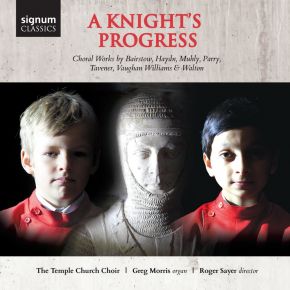 The Temple Church Choir gives the world premiere recording of Nico Muhly’s Our Present Charter – a brand new four-movement work commissioned by the choir to celebrate 800 years since the sealing of the Magna Carta. Directed by Roger Sayer and featuring organist Greg Morris, the recording also features choral works by Parry, Vaughan Williams, Walton, Bairstow, Tavener and Haydn. The Temple Church Choir, founded 1841, consists of eighteen boy choristers and twelve professional choirmen. It is still considered to be one of the finest choirs in London, a reputation it quickly gained after its founding. The American composer Nico Muhly (b. 1981) received his Masters in Music from the Juilliard School where he studied under Christopher Rouse and John Corigliano. HE also spent several years working for Phillip Glass as a MIDI programmer and editor. His wide scope of work for soloists, ensembles, and organizations covers multiple genres, including music for film, opera, choral