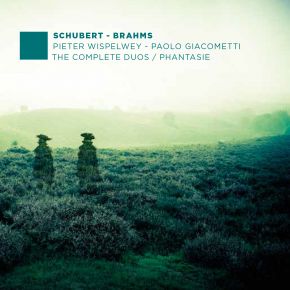 Can a virtuoso be expected to keep his hands off cherished chamber works because they were not written for his instrument? Should a passionate admirer of Schubert and Brahms really forego on 14 duos because he does not play the violin, the viola, the flute, or the arpeggione?
Dutch cellist Pieter Wispelwey doesn’t believe so. In his largest phonographic enterprise up to now, he embarks on a series of 6 CDs dedicated to the complete chamber duos by Franz Schubert and Johannes Brahms. Teaming up with his trusted piano partner Paolo Giacometti, Wispelwey wants to demonstrate that music written by major Lied composers can rewardingly be played on the violoncello, the string instrument which most resembles the human voice.
On “Phantasie”, the upcoming first installment of the Complete Duo series, Wispelwey confronts late works – Schubert’s sensational Fantasie D. 934 and Brahms’s breathtakingly lyrical Viola Sonata op. 120 nr. 2 – with the ebullient but unusually profound Sonatina D. 409 Schubert wrote as a young man of 19.
Wispelwey and Giacometti have been called “exceptionally imaginative and impassioned performers” (American Record Guide), and their collaboration has spawned recordings rated as “fascinating, provocative, almost perverse” on account of their “immediacy and involvement” (Sunday Times). A previous Brahms project was hailed a “tremendous performance” on account of its “wonderfully imaginative and wide-ranging tonal qualities” (BBC Music Magazine).

Johannes Brahms (composer)More information
20-04-2016 vpro
"vpro - april 2016"
01-09-2015 kulturradio rbb
""harbors some tonal surprises.""
20-07-2015 Fono Forum
""Here two musicians are playing together, listening to each other and it seems like they are fascinated themselves, that their focus lays on different aspects."
Music 4 stars
Sound 4 stars"

22-06-2015 NRC Handelsblad
""Onorthodox series: all duo's by Schubert and Brahms op cello (and piano). More convincing than expected in the arrangements, but not everywhere totally convincing.""
16-06-2015 Ich-habe-gehört
""The Brahms-Schubert project is a dedicated plea for the violoncello with its abilities to sing and its tonal versatility. One can be excited for the sequel.""
07-06-2015 Radio 4
"De prijs-CD is elke dag te horen om 13.15 in Licht op 4."
29-05-2015 Cobra.be
"
"Music that makes you happy"
[...]
"Nowadays there are so many things you can do to make yourself happy, and one could say 'try listening to this music in this performance'. And eventhough the music has certain dark undercurrents, one is mentally raise up by this."