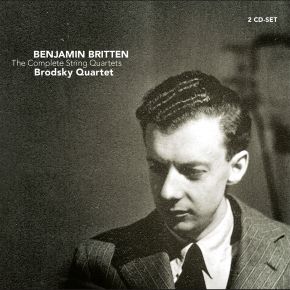 The numbering of Britten’s three quartets is deceptive: between 1926 and 1936 he wrote ten works for quartet, including six full-length quartets, although only one of these (the Quartet in D of 1931) was published in his lifetime. Clearly the medium of the quartet was far more significant for Britten than it might appear. Few works caused him to work harder than the Suite Alla Quartetto Serioso (subtitled, after Shakespeare’s A Winter’s Tale, ‘Go play, boy, play’), composed between 1933 and 1936. Britten lost hope of any success with this
work, in spite of the effort that he had put into it, and the Divertimenti and the Alla Marcia remained unpublished until 1983, seven years after his death. In the spring of 1939 Britten went to Canada, and from there to the USA, where he was to remain for nearly three years. He began sketching a quartet in the summer of 1940. The quartet was first performed in Los Angeles in September 1941 by the Coolidge Quartet. Unlike the Divertimenti, the Quartet was generally well received, and widely played. A ‘first’ quartet this may be, but it is the work of a composer who knew exactly what he wanted to say. Although the Second followed only four years later, there is then a gap of thirty years before the Third. Indeed he wrote hardly any chamber music at all after the Second Quartet. Britten’s career shows a major change of direction once he had succeeded in the field of opera, and the quartet is almost left behind. But this does not diminish the stature of his three mature string quartets: the entirely different and distinctive approach he adopted in each one of them makes one wish that he had found the space to write more.

The Second Quartet was commissioned early in 1945 by Mary Behrend, a notable patron of the arts. It was first performed in November. With hindsight we know the Third Quartet to be Britten’s last major work. At the time of its completion, a year before his death - he was still planning large-scale works. But he was well aware that his time was limited, and it is neither imagination
nor sentiment that sees the shadow of death over the music. The Third Quartet is close to the world of the Cello Suites, with their
increasingly free form and imaginative range.