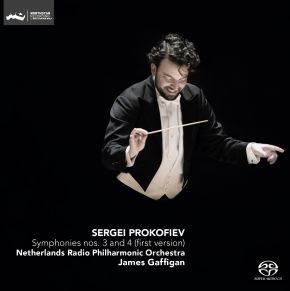 Symphony no. 3, opus 44 (1928)
Sergei Prokofiev has a large reputation, although many of his works are seldom heard. The reason for this is that his music has a certain image, one created to some extent by the composer himself and one from which he found it difficult in later years to distance himself, no matter how hard he tried.  One might summarise this image as that of a poker-faced comedian. Compositions that confirm this impression, such as the Classical Symphony, the Third Piano Concerto and some of his early piano works are amongst his best-known works.
He shows a different side in his works for voice; a side that is clearly close to his heart, since even though most of his operas enjoyed little in the way of success during his lifetime, he wrote at least eight of them, with lyricism to the fore and a tendency for declamation and unpredictable forms. The less popular of these include L’Ange de feu, based on the 1907 novel by the writer Bryusov, setting a 16th century tale of the passionate young girl Renata, who becomes obsessed by the devil. She vacillates between fascination and rejection. She can neither circumvent nor defy her own sorcery and is ultimately condemned to death. Prokofiev worked on this piece almost throughout the 1920s. When he realised that a performance was unlikely at the time, and because he was unaccustomed to leaving his musical inventions unperformed, he rearranged the material from the opera into a new symphony, his Third.
Despite this clear relationship, the symphony is neither a symphonic synopsis of the opera nor a pot-pourri of themes from it. The themes that are quoted from the opera are completely recast. The first movement opens with a slow introduction and there are clear aural traces of exposition, development and recapitulation in the ensuing moderato. Many themes may well have been drawn from the opera, but their development betrays the rhythmic alertness and refinement of orchestration that are features of Prokofiev’s more grotesque works. The second movement contains elements of a classical adagio: a ternary form with the drama concentrated in the central section and a retrospective coda. The two final movements are more in the nature of movements from a suite; more rhapsodic in form, more instrumental than vocal in their melodic style. The listener who is unaware of the history of the work would be unlikely to recognise its operatic roots. Prokofiev considered the first movement – the furthest removed from the world of operatic music – to have been the most successful. He described the symphony as a whole as being ‘much more profound’ than many of his other works. He even went as far as to describe the work as ‘one of my most important compositions’.
Critics and others who heard the work were less enthusiastic. At the Paris premiere on 17 May 1929, the conductor Pierre Monteux called the composer on to the platform to acknowledge the applause (an unusual step at the time) but this did not significantly help his cause. Hindsight might explain that there was another reason for the scant enthusiasm. He was to return to his homeland in the 1930s and many people attributed the later shift in his style to artistic directives from the authorities. But his new style was already in evidence before his return to Russia, for instance in this symphony.

Symphony no. 4, op. 47 (1930), first version
Like the Third Symphony, the Fourth also has close links to an explicitly narrative composition, this time to the ballet L’enfant prodigue, on which the composer was also working in 1930. At that point, Serge Koussevitzky was the conductor of the Boston Symphony Orchestra, which was commissioning works to celebrate its fiftieth anniversary from composers such as Prokofiev (Fourth Symphony), Stravinsky (Symphony of Psalms), Roussel (Fourth Symphony) and Hindemith (Concert Music for brass and strings). He was disappointed when Prokofiev told him of the relationship between the two works, as he feared that the symphony might only be partially original. The conductor need not have been too concerned, however. As with the Third Symphony, the material of the Fourth may well be derivative in part, but it is developed in a novel way. Only the third movement – a scherzo in nature, if not in name, with a characteristic Prokofiev twinkle in its eye – is drawn intact from the ballet, from the ‘dancers’ episode in Scene 1. Fragments from the ballet can also be heard in the second movement (‘the return’ from Scene 3 and ‘the awakening’ from Scene 2) and in the fourth movement (‘the departure’ and ‘the meeting of friends’ from Scene 1). There are discernible traces of classical sonata form in the opening movement. Both of the outer movements are characterised by the tension between the material, which is sometimes thought of as being programmatic, and the way in which the material is developed, with instrumental angularity and rhythmic regularity vying against expansive lyricism and whimsical phrasing. This may be why the composer described the first movement as being ‘to some extent Mozartian’. The caustic tone of his earlier works, particularly those for piano, is largely gone and the tension between plangent harmony and melody on the one hand and Prokofiev’s leanings towards classical forms on the other hand – so much a feature of his early period style – is elaborated in much gentler focus. The humour and cynicism of the short works have given way to the need to excel in a larger-scale work, where lyricism is more prominent than drama. The finale sounds more rhapsodic and improvisational than the first two movements, because the material borrowed from the ballet for the third and fourth movements is more extensive than in the first movement and because the ballet is laid out as a series of ‘numbers’. Prokofiev enjoys playing with the contrast between minor and major keys, with an ever-changing instrumental palette, with large and small gestures in an unpredictable form and with his own unique form of modality.
Whether the early critics were aware of the background to the work or not, most of them felt that the work was far from cohesive. The upshot was that the composer seldom heard the work after its Boston premiere. Nonetheless, he regarded it as one of his most successful compositions. For the rehearsals leading up to the work’s European premiere in Brussels in 1930, the musicians were forced to decamp to a smaller hall, as the main hall was being used for rehearsals of Stravinsky’s Symphony of Psalms. Prokofiev did not make any big fuss about this; he viewed his own L’enfant prodigue as his comment on Stravinsky’s Apollo, another work of non-abrasive neo-classicism.

Netherlands Radio Philharmonic Orchestra (orchestra)More information
24-08-2016 HR Audio
"Is James Gaffigan such a good conductor? Better, he is phenomenal!"
01-12-2015 Opusklassiek
"["]..And it gets even better because all of the other 5 (or 6 actually) symphonies of Prokofiev have now also been recorded by the orchestra and Gaffigan! This is a feast!"
"The one who knows this opera, experiences a feast of recognition in this score every time . Prokofiev however did not have to apologize at all, because in his opera the musical characterization takes place in the orchestra, not in the singing voices. The result is a grand symphonic drama , and the one who does not know about the background information, would not have the slightest idea that we are dealing with a recycled opera score here ."
"
21-10-2015 De Volkskrant
""Listen to how his Third Symphony opens with the allure of a thundering steel factory, slowing down to a feeble whale, to culminate within a minute in a flowing melody, where all kinds of things are ripple around.""
09-10-2015 HR-Audio
"["]..To sum up: We have here two symphonies played in such a way that it sheds new light on Prokofiev’s symphonic output, deserving all our attention. The recording, for which Northstar and Bert van der Wolf may take all the credit, is extraordinary.""
01-10-2015 Klassieke Zaken
"[''] .. Gaffigan has what it takes: overview and keen insight into the music score, prevalence and of course a fantastic orchestra whose players, both individually or together. The bring the best out of the music.""
24-09-2015 Het Parool
""[…]  a briljant soundadventure. Gaffigan shows himself as the ideal guide, not lightly helped out by a great performing Radio Philharmonic Orchestra.""
21-09-2015 NRC Handelsblad
"[''] .. Here as well Gaffigan was in the lead of a 160 musicians in a very primary color drawing, and there is some gradations missing."