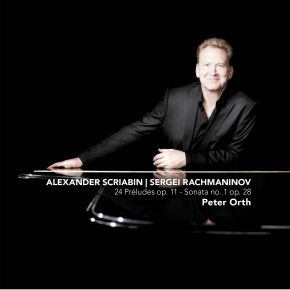 As for these pieces I can tell you, I did not know anything about the Rachmaninoff Sonata at all until my friend Dietmar Falke told me to take a serious look at the score, which I did. To my surprise I found it most thrilling and decided to learn it.
From the beginning of its premier in 1908 it has gotten a bad rap. It was not well received, and Rachmaninoff abandoned it. On top of that, Horowitz’s performance of the Second sonata in the 1960’s so captured the imagination of the public, that the D minor Sonata really never had a chance. I, for one, find it neither ponderous nor too much and whenever I have been playing it, the public goes along with this music quite happily.
I first heard the Scriabin Preludes in a Carnegie Hall concert of Gina Bachauer’s, back in my school days. The next day I bought a score and ever since they have been a constant companion in my repertoire.
We recorded this music at the Wuppertal’s Imanuelskirche in March of 2014. Dietmar Falke was my wonderful piano technician and I brought my own Steinway D from my studio in Bad Meinberg. We set up on a Monday, and had everything in the can by late Thursday afternoon.
Peter Orth

Peter Orth (featured)More information
19-02-2016 Musicweb International
""In summary a well-filled disc of two major but hardly well known works of the Russian piano literature, in what I think is a unique coupling. If you don’t know either, Peter Orth will be a valuable guide to these contrasted masterworks. There is very good sound and a booklet note which has the relevant background to each composer and his opus, but is a bit skimpy on the actual music.""
01-12-2015 Klassieke Zaken
"["].. The American pianist Peter Orth, who as a boy of six knew he wanted to be a pianist after he heard a recital by Arthur Rubinstein, played the Preludes of Scriabin with the perfect balance between form and content, an expressive and melodious toucher, flexible tension and organic phrasing.""