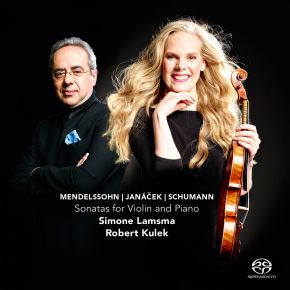 The sonatas in this captivating recital epitomise three key stages in the history of Romanticism. Mendelssohn did more than any other composer to ensure a seamless transition between the Classicism of Haydn and Mozart and the lyrical expansiveness of a new era. His 1838 Sonata tantalises the senses, combining passion and brilliance with meticulously balanced precision. By the time his friend Schumann began work on his D minor Sonata just 13 years later, the Romantic era was in full swing, and his lifelong exploration of alternative dreamworlds had begun to affect his own ability to keep a firm hold on reality. Janáček’s Sonata was composed on the eve of the First World War at a time when the old social order and the Romantic dream were on the point of extinction, reflected in a multi-faceted score of searing emotional intensity and often startling changeability. Mendelssohn was one of the great musical polymaths of the 19th century. There was seemingly nothing he could not turn his hand to with equal success, from philosophy, linguistics and swimming to water colours, poetry and gymnastics, yet it was above all music that activated his insatiable genius. In addition to his almost unparalleled achievements as a boyhood composer and pianist, he was also an outstanding violinist and violist. ‘He never touched a string instrument the whole year round,’ recalled fellow composer-conductor Ferdinand Hiller (1811–1885), ‘but if he wanted to he could do it, as he could most other things.’ Yet in later life, with many other commitments sapping away at his energies, the violin only came out of its case when Felix was called upon to fill out domestic chamber ensembles as the need arose.

Robert Schumann (composer)More information
03-08-2016 De Volkskrant
"Lamsma made a great impression, with here meaty, romantic tone, not afraid of a glissando more or less."
07-05-2016 NRC
"NRCWEEKEND - 7 & 8 May"
17-12-2015 Luister
"["] .. The latest CD of Simone Lamsma once again proved its exceptional qualities. She can not be too carried away by the emotion of the moment, could play as easily colorful as virtuoso, basically works in one part with one pace and controlled the grand gesture as much as the almost inconspicuous change. The effect on the repertoire is very enjoyable.""
06-12-2015 Pizzicato
""The surround recording from Challenge Classics stands out due to especially brilliant and powerful interpretations and a finely coordinated dialogue between the instruments. This is perfect harmony.""
01-12-2015 Klassieke Zaken
"["].. Lamsma and her Latvian-American pianist Robert Kulek,who  livesin the Netherlands, prove in united efforts their mastery give the music all they have got, keeping the overview and nowhere becoming sentimental."

["]..The resilience is heartwarming and every note will get a clear interpretation.""