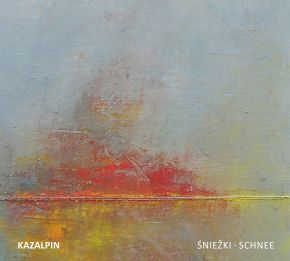 They sit in front of a hut and enjoy a cup of coffee and the sun's rays. Why can't it always be that easy? The photo of Kazalpin in the booklet outlines an idyll that is seemingly totally ignored the renewed East-West conflict. A phenomenon bringing different peoples together, which apparently can only work in art and demonstrates the absurdity of the idiots of nation rulers with a few notes and a successful musical joint venture in a charming way. In the case of Kazalpin, they have already being doing this for five years despite all geopolitical shifts. For the second time, that Alpine ensemble of the Lucerne tenor and soprano saxophonist Albin Brun (who plays the diatonic accordion on two songs) tries to square a circle, i.e., to achieve the impossible, with Patricia Draeger (accordion, flute), Claudio Strebel (double bass) and Marco Käppeli (drums) as well as the Belarusian singing trio Akana (Irena Kotvitskaja, Rusia, Nadzeya Tschuhunova). In this particular case, this means to interweave Franco-Swiss jazz images with Belarusian folklore tunes. What sounds at first glance like a project with a seemingly incompatible mixture layer works beautifully in the real life of the musicians. While nobody had to compromise or disavow his origins on the debut album of Kazalpin "East Side Story" (DMCHR 71509) in 2011, curiosity and genuine artistic openness drives each Kazalpin band member far beyond his or her horizons on the current album "Śniežki – Snow". The collaboration has become much more interesting and differentiated, Albin Brun said. "We know each other so well now that we trust each other. These ancient Belarusian songs are an integral part of the band concept. Each of us wants to keep their primitive force, their core statement. We jazz musicians especially have no interest at all to destroy these traditional pieces with some wishy-washy arrangements." Indeed, what Kazalpin presents on the twelve songs of their new CD sounds like a successful experiment: the amalgam of two worlds. Strangely familiar, pleasantly consumable, rousing, but still different than comparable world-jazz-crossover productions in a quite natural way, maybe even a little strange and inaccessible. The bilingual song "Śniežki – Snow" is symbolic of this, which exposes the reckless symbiosis as a fortunate coincidence of destiny. "Irena, Rusia and Nadzeya sang this Belarusian a capella song called 'Śniežki' one day," Brun said. "When I found out that it translated as 'snow', I was quite taken aback. The reason was that I had composed a song independent of that which is also called 'Schnee' (trans: 'Snow'). Two perspectives on one and the same thing, not agreed about in advance. I thought to myself that it could result in a beautiful connection. And it really fits!" "Śniežki" and "Snow" are on the disc in addition to a number of traditional tunes and some original ones, whereby the differences between a revised folk song and a jazz tune can only be detected by analytical listening.