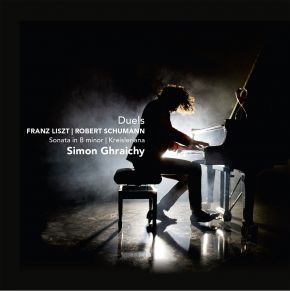 Schumann and Liszt met for the first time at one of Liszt’s concerts in Dresden on 16 March 1840, when the two musicians felt that they had known one another for twenty years, so familiar were they with each other’s music as well as with their published writings and respective reputations. Both men were writer-composers imbued with the spirit of literature and capable of expressing themselves just as well through words as through music. But many things set them apart: Liszt was living the life of a famous virtuoso à la mode while Schumann could not follow the same path. In his youth Schumann had imagined a career as a man of letters.

Schumann and Liszt were both fascinated by E. T. A. Hoffmann, a writer who protean genius of the Romantic imagination, being himself a composer, poet and critic. We know that Schumann identified with Johannes Kreisler, the fantastical and imaginary Kapellmeister who appears as  Hoffmann’s alter ego in several short stories in the Fantasiestücke in Callots Manier of 1813–15 and his novel Kater Murr of 1819–21. As for Liszt, his features and his whole elusive bearing were regarded in the salons as Hoffmannesque – it was these very qualities that made him so hateful in the eyes of many of his contemporaries, including Clara Wieck. “Liszt is a veritable artist in the fullest meaning of that term,” wrote Théophile Gautier. “People have made much fun of his long hair, of the fact that he looks like a character straight out of Hoffmann, of his ecstatic glances, his convulsive gestures and of the way he moves like a man possessed by the devil.”

This recording represents through its pieces duality between poetry and virtuosity, extravagance and reclusiveness, melancholy yet sudden sunshine gleams.

Daring, exciting, fiery......,this is a GREAT CD, gonna give it to all my friends because it LOOKS beautiful too! and the Lizst Sonata, ever so passionate, like I heard a new piece! Once again it is the Pianist who makes the composer shine....

"The differences between Schumann and Liszt are big, but by staying within the story  of highlighting the dramatic opposites between Schumanns alter ego’s Eusebius and Florestan, Ghraichy unites them. Very beautiful. Liszts piano transcription of the Allegretto from Beethovens Seventh symphony completes this CD. Ghraichy turns it into a gracious dance, somewhat melancholic but with a hopeful ending.”