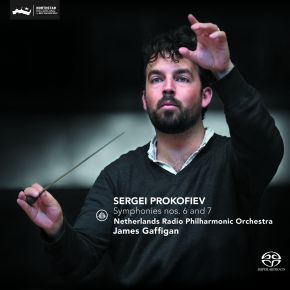 Sergei Prokofiev’s Symphony No. 6 was composed as an elegy to the fatalities of World War II. Musicologists frequently regard this piece as the darker twin to the triumphant Symphony No. 5. Prokofiev wrote of this piece: “Now we are rejoicing in our great victory, but each of us has wounds that cannot be healed. One has lost those dear to him, another has lost his health. These must not be forgotten.” The Seventh Symphony was Prokofiev’s last, completed in 1952, the year before his death. The tone of the symphony is nostalgic and melancholic. Four years after the composer’s death, the work was awarded the Lenin Prize. American born conductor James Gaffigan is the Chief Conductor of the Lucerne Symphony Orchestra, and the Principal Guest Conductor of the ensemble featured here, the Netherlands Radio Philharmonic Orchestra. The natural ease of his conducting and his compelling insight have brought him attention internationally.

James Gaffigan’s Classical is humorous and absolutely charming. And in the totally different context of the Fifth Symphony, he detects similar moods. The Netherlands Radio Orchestra is brilliant, and the Challenge Classics sound recording very transparent.

"
01-10-2016 De Volkskrant
""Gaffigan loosens the notes from the musicpaper on a magical way.""
05-09-2016 Stereophile
"First, James Gaffigan's view of these works is passionate, and he's more overt about that passion than is Valery Gergiev in his traversal. This is Prokofiev with weight and wit. In particular, symphonies 3 and 6 stand with my favorite performances, by Abbado and Weller, respectively (both on Decca LPs). Second, the Netherlands RPO carries it all off with power and precision. Third, the engineering by Bert van der Wolf is spectacular, with a spacious soundstage and formidable bass."
24-08-2016 NorthStar Recording Services BV
""With these forces Gaffigan is not only faced with an artistic challenge, what this symphony undoubtedly is, but also with an enormous management one: Holding the various groups together in a coherent and harmonious way.""
22-03-2016 Het Parool
""Prokofiev shows that even with simple resources you can reach great sophistication.""