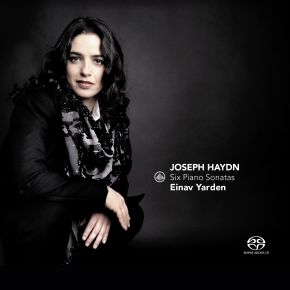 The six keyboard sonatas selected for this CD are taken from Haydn’s middle period, all written between 1773-1776 when he was loyally at the service of Prince Nikolaus Esterházy (and to whom three of the sonatas are dedicated). Even in the context of the vast development and change in his style in 60 years of composition – moving from the early Classical period and Style Galant, through the Empfindsamkeit and C.P.E Bach’s influence, to establishing and refining what is now the essence of “The Classical Style”- Haydn displays in a short period of 3 years an astonishing diversity of compositional techniques, modes of expression, style and characters. Most of the six selected sonatas are also quite rarely heard on the concert stage, have not been recorded often, and surprisingly, few pianists have been exposed to them. This CD sheds light on some of those wonderful ‘neglected’ sonatas, as well as aims at contributing to the growing revival of interest in Haydn’s genius as a keyboard composer.
Re­creating a 1770’s Sonata requires not just an automatic follower of direction signs, but a truly accomplished player. That is to say an imaginative, cultured, sensitive, and genuine musician who is an active participant in revealing the music’s structure, deep meaning and manifold beauty.

Need download Hires options like in Channel Classics. Many audiophiles don't have a (SA)CD player anymore and on Qobuz is only a 44,1/16 bit version available

Please, what instrument is Ms. Yarden playing in these Haydn Sonatas?

Joseph Haydn (composer)More information
01-02-2017 De Pianist
"She let them hear very nice piano playing: melodious with mulled pedal usage and dynamically nuanced"
15-12-2016 Audiophile Audition
"This is a very fine addition to the Haydn repertoire. If the sound is merely unremarkably good for a SACD, the playing is stupendous. I predict more great things from this young Israeli artist. Presumably another run at Haydn is in the offing, or following the logic of this recording, an investigation of lesser known D. Scarlatti."
24-10-2016 Gramophone
"Yarden clearly has much to say in this repertoire and she’s beautifully recorded too."
01-09-2016 Fono Forum
" "Einav Yarden displays an inventively intelligent Haydn, full of wit and abundance, with a delicate, varying touch... her playing is finely-spirited and artful [...].Yarden plays a wonderfully exuberant, vibrant Haydn, glowing, transparent, adventurous, at times intimately chamber-music-like, at times grand and orchestral. A voice for Haydn!"

15-08-2016 NTR Radio 4 Plaatpaal
"Radio 4 Plaatpaal (extra airplay and attention on Radio 4 and website)"
01-08-2016 Péché de classique
"Un disque à ne pas manquer aussi bien pour les œuvres que pour leur interprète et pour la chaleureuse prise de son de Challenge Classics"
01-06-2016 Diskotabel Radio 4
"“Fantastic music, I love the Sturm and Drang style, the contrasting emotions, the whimsical. I myself like to hear this on a fortepiano because of the differences in nuance and colors it can give and I think the modern instrument lacks that, but this says nothing about how well this pianist is playing here, which is very good!” "
01-06-2016 Diskotabel Radio 4
"